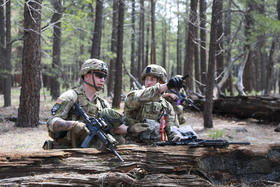 NIAGARA FALLS, NEW YORK (10/21/2021) (readMedia)-- Fifteen Army National Guard Soldiers from across New York will compete to find out who among them is the "best warrior" in a grueling three-day test of military skills, knowledge, and physical and mental endurance in Youngstown, New York.

The Soldiers are competing for a chance to represent the New York National Guard's premier combat unit, the 27th Infantry Brigade Combat Team, in competition at state, regional, and national levels.

Media are invited to see Soldiers in action and speak with them during marksmanship and military skills exercises on Friday afternoon, October 23.

Reporters must RSVP to Maj. Avery Schneider, Public Affairs Officer at 917-443-1864 no later than 12 p.m. Friday. Escort is required in the training area.

The Best Warrior competition is an annual event in which Soldiers from across New York compete at their local units before going onto a statewide competition.

The events usually include a stress shoot, which involves engaging multiple targets with multiple weapons in a simulated tactical environment, and a physical fitness test as well as a 12-mile forced march in which Soldiers must carry a 35 pound pack and a weapon.

Soldiers are also judged on tasks that can range from assembling and disassembling a machine gun, emplacing a land mine, navigating at night and during the day with map and compass, to treating a simulated casualty.

This year New York Army National Guard Corporal Dakoatah Miller, a Cortland resident and a member of the 27th Infantry Brigade Combat Team finished in second place in the Army National Guard's nationwide competition held Arizona in July. Prior to that he won the state and northeast regional competitions.

The 27th Infantry Brigade Combat Team is headquartered in Syracuse and is a light infantry brigade of more than 4,000 Soldiers. The brigade comprises three infantry battalions, a cavalry squadron, an artillery battalion, a brigade engineer battalion and a support battalion. Elements of the brigade are located across New York from Long Island to Jamestown.

One battalion, the 1st Battalion, 182nd Infantry Regiment is part of the Massachusetts Army National Guard.

The 27th IBCT traces its history back to the 27th Division of World War I and served in both world wars. The brigade was mobilized following the attacks of Sept. 11, 2001 and has deployed to Afghanistan, Kuwait, and Ukraine in the years since.