Public Defenders Come Together for Learning and Celebration 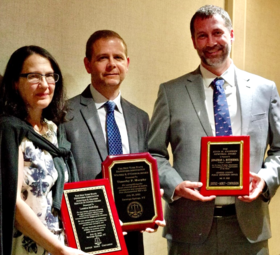 SARATOGA SPRINGS, NY (07/27/2022) (readMedia)-- A New York City Legal Aid lawyer advocating for the rights of people who are subject to parole supervision and those who have been re-incarcerated for alleged parole violations and an attorney from a federal defender office in Western New York both received honors from the New York State Defenders Association (NYSDA) Monday night. NYSDA presented Lorraine McEvilley with the Jonathan E. Gradess Service of Justice Award. Timothy Murphy received the Wilfred R. O'Connor Award. The accolades were presented during NYSDA's 55th Annual Meeting and Conference, a hybrid in-person and virtual gathering following two years of remote-only events due to COVID-19.

McEvilley is the Director of the Parole Revocation Defense Unit (PRDU) at The Legal Aid Society (LAS) in New York City. NYSDA Executive Director Susan C. Bryant said in presenting McEvilley's award, "Lorraine has been a tireless advocate for the rights of people who are subject to parole supervision and those who have been re-incarcerated for alleged parole violations."

Tina Luongo, Attorney in Chief of the Criminal Defense Practice at LAS, wrote that "Lorraine is a lifelong defender, steadfast in her commitment to the people she serves." At PRDU, which Luongo said is "NYC's primary public defender representing people who were remanded at Rikers Island on parole revocation violations," McEvilley's "expertise in challenging carceral and parole systems helped lead NYS to pass the Less Is More Act." Emily Singletary, Co-Executive Director of the advocacy group Unchained, wrote that "Lorraine has been an invaluable partner to the #LessIsMoreNY campaign from its inception."

Once the Less is More Act became law, McEvilley and her program turned to ensuring its proper implementation; LAS filed a mass writ of habeas corpus against the New York State Department of Corrections and Community Supervision (DOCCS) on behalf of clients who were denied their rights to a release hearing guaranteed by Less Is More.

And McEvilley shared information with lawyers across the state information to help ensure that Less is More was put into practice. As just one example, she was among the presenters at a statewide NYSDA webinar on the Less is More Act last year, attended by nearly 250 lawyers, and at other events as well.

The recognition of Murphy also focused on training offered to other defense lawyers. Praises for his skill as a presenter over the years included this evaluation by one lawyer attending a Murphy session: "T. Murphy – Thank you, thank you, thank you for the client centered presentation and encouragement!"

NYSDA Executive Director Susan C. Bryant lauded Murphy for his stellar work as a trainer. From the first time that she saw him make a presentation, Bryant said, "I have been impressed by his thoughtfulness and brilliant legal analysis and his dedication to sharing all of that with NYSDA and defenders around the state."

David Schopp, head of the Legal Aid Bureau (LAB) of Buffalo where Murphy was a staff attorney in the appellate unit for 9 years and was later the Chief Attorney of that unit, said that "Tim quickly stood out as one of the Unit's most thorough researchers and one of its best writers," displaying "an amazing passion for appellate work, a real empathy for his clients and a consequent commitment to do the very best on their behalf." Further, Schopp said, "[t]he increased quality of representation established during Tim's leadership of the Unit continues to this day."

Murphy's move to the federal defender position some years ago did not end his dedication to helping state defenders improve their knowledge and the quality of their representation. In fact, he gave his customary annual update at the conference just hours before receiving the Wilfred R. O'Connor Award.

Wilfred R. O'Connor was a founding member of the Defenders Association and its president from 1978 to 1989. His beliefs were clear: every defendant, regardless of race, color, creed, or economic status, deserves a day in court and zealous client-centered representation. He believed in making a difference one life at a time – through mercy, justice, and compassion.

The Jonathan E. Gradess Service of Justice Award, named for NYSDA's first Executive Director, commends individuals or organizations that have provided outstanding support to public defense and to NYSDA.

As in the past, the Genesee County Public Defender's Office presented its Kevin M. Andersen Memorial Award during NYSDA's conference. This year's recipient is Jonathan Rothermel, Senior Assistant Public Defender in the Broome County Public Defender's Office. The nomination papers submitted by his boss praised Rothermel as "one of the very best criminal defense attorneys in the area in and out of the courtroom," "a leader and mentor in the office," and "a trusted and esteemed member of the legal community." The nominator, Broome County Public Defender Michael T. Baker, described a difficult murder case in which Rothermel successfully raised a justification defense for a client who repeatedly said afterward that Rothermel had been the only one who always believed her. Rothermel was also the office's point person for seeking compassionate release for clients during COVID; nearly two dozen people were reintegrated. Baker concluded, "I honestly don't know how I would have managed the office over the past few years without his efforts, his sage wisdom and advice, and constant reminder of what we do and why we do it."

The Award was established by the Public Defender's Office to remember and honor Kevin's dedication to the public defense system and his compassion for his clients.