Renaissance Albany to be Honored 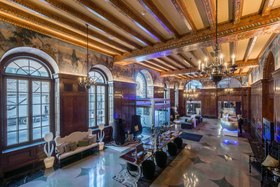 ALBANY, NY (04/12/2016)(readMedia)-- The Preservation League of New York State has selected the Renaissance Albany Hotel (at the historic DeWitt Clinton Hotel Building) to receive an award for Excellence in Historic Preservation.

"Opened in 1927 as the DeWitt Clinton Hotel, this prominent building just east of the New York State Capitol and South of Albany's City Hall had suffered a long decline, and served as subsidized housing before closing in 2006," said Jay DiLorenzo, President of the Preservation League. "A $51 million restoration used tax credits and delivered a historic hotel to New York's Capital city. This project very clearly illustrates the power of rehabilitation tax credits and the role of historic preservation in economic development to New York's lawmakers."

The exterior of the eleven-story building, with Classical Revival and Beaux Arts-inspired elements, was returned to its former grandeur. Interior renovation focused on returning the main floor – main lobby, elevator lobby, ballroom, and arcade – to its historic configuration. Local artisans and skilled workers restored the chestnut wood paneling and painted finishes, marble and terrazzo flooring, barrel-vaulted ceiling and plaster medallions in the arcade and the ornate plaster ceiling and columns in the ballroom. Four conservators from the Clark Art Institute were engaged to restore the lobby murals depicting a dozen events from New York State's history.

MacRostie Historic Advisors served as the historic consultants for the project. "We are fortunate to have the opportunity to work on such an important building for the City of Albany and with such a great team that was committed to bringing the 1927 hotel back to its original splendor," said Albert Rex, Partner and Director of MHA Northeast in Boston. "The real success of the project can be seen in the public spaces on the ground floor and the mezzanine level where original murals and paint schemes reflecting New York's Dutch heritage were restored and the return of the arcade to its original configuration."

"With our annual awards program, the Preservation League explores not just the present, but the future of historic preservation. Many of the 2016 award winners provide valuable examples for others by incorporating energy efficiency techniques, adaptive reuse strategies and Federal and State Historic Rehabilitation Tax Credits," said DiLorenzo. "Each year, we are impressed by the number and variety of laudable nominations, and this year was no exception. We are delighted to celebrate the rebirth of the historic DeWitt Clinton Hotel as the Renaissance Albany, and to commend all members of the project team for their leadership and vision."