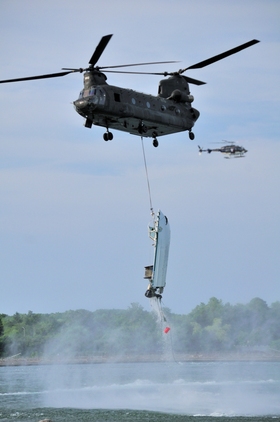 A Rochester based CH-47 retrieves a boat from the brink of Niagara Falls on June 19, 2011.

ROCHESTER, NY (10/20/2011)(readMedia)-- Area employers will get a first-hand look at New York Army National Guard aviation units stationed at the Rochester International Airport on Friday during a lunch sponsored by the Genesee Committee of the Employer Support of the Guard and Reserve program.

Members of the media are invited to attend.

WHAT: A lunch with presentations on the Employer Support of the Guard and Reserve Program, and New York Army National Guard aviation operations at the Rochester flight facility. The event will include static displays of equipment. Employers will also take short orientation flight in a CH-47 Chinook Heavy Lift helicopter assigned to Company B. 3rd Battalion 126th Aviation. The lunch and briefings will last for approximately an hour followed by an Employer Support of the Guard and Reserve awards presentation and then the orientation flight.

Reporters will be able to interview ESGR officials, New York Army National Guard leaders, and local employers about the Guard and the ESGR program. Visual opportunities will include civilian bosses boarding and leaving the CH-47 and viewing static displays and speaking with Soldiers. (DUE TO THE NATURE OF THE FLIGHT MEDIA WILL NOT BE ABLE TO ACCOMPANY THE CIVILIAN EMPLOYERS.)

Employer Support of the Guard and Reserve

The National Committee for Employer Support of the Guard and Reserve (ESGR) is a Department of Defense agency that promotes public and private understanding of the National Guard and Reserve in order to gain employer and community support. ESGR is comprised of a community-based volunteer network of over 4,500 members, who serve on 54 committees (in every state, the District of Columbia, Guam, Puerto Rico and the Virgin Islands), implementing employer support programs within their local communities.

Today, in both manpower and force capability, the Reserve Components comprise nearly half of the total armed forces.

As a result, employers are being asked to sustain a much greater level of employee absence and related consequences. The complications this "contract" create for employers are compounded by low unemployment rates, an anticipated reduction in the national workforce of nearly 15 percent over to next 10-15 years, and a growing reliance by both military and civilian employers on small segments of the workforce with specific job skills that are in high demand. It is also estimated that Reserve Forces will spend more time away from the workplace defending the nation, supporting a demanding operations tempo and training to maintain their mission readiness.

Detachment 1 Company B. 3rd Battalion 126th Aviation (Heavy Lift) Operates CH-47D Chinook helicopters from the facility. The CH-47 is the Army's largest helicopter and can lift more than 30 Soldiers and carry 28,000 pounds of cargo. The 98-foot long, twin rotor helicopters are invaluable for moving troops and equipment in the mountains of Afghanistan. The company has deployed to Afghanistan and is expected to deploy again in 2012. The company's aviators trained Canadian Forces pilots to operate the CH-47. CH-47s assigned to the unit were used to move Federal Emergency Management Agency supplies during the National Guard's response to Tropical Storm Irene in August and September.

Other maintenance and support elements of the 3-126th Aviation are also based at the facility.

Company F , 1st Battalion 169th General Support Aviation Battalion operates UH-60 Blackhawk helicopters configured for the medical evacuation role. These helicopters are equipped with hoists and can be used to conduct rescues. During the New York National Guard response to Binghamton-area flooding in the aftermath of Tropical Storm Lee in September, helicopters from this unit were dispatched to the area in case the hoist capability was needed. Company F is expected to deploy to Afghanistan in 2012.