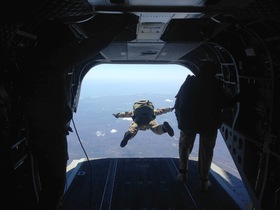 A Rhode Island National Guard Special Forces Soldier jumps from a CH-47 helicopter assigned to Co. B 3rd Battalion 126th Aviation during a training mission over Rhode Island in May.

The two CH-47F Chinook helicopters took roughly three hours to fly to Rhode Island and then certify to support the static line parachutists. The New York Army National Guard aircrews will spend Saturday making turns dropping the paratroopers alongside two other aircraft from the Pennsylvania Army National Guard over the competition drop zone.

The support to the Leapfest competition builds crew proficiency and helps the unit train on one of the required tasks for pilots and crews, explained Chief Warrant Officer 5 Michael Zanghi, of Rochester, N.Y.

"We'll spend about 4-6 hours on Saturday putting jumpers out," Zanghi said. "We'll take on six teams of four jumpers each, and try to position ourselves so that each jump is from the same spot each time."

The newly fielded CH-47F will assist the crews in that drop zone positioning with its upgraded navigation system, Zanghi said, explaining that consistency in placing the aircraft in the right spot for a drop is important for all the jump teams.

Leapfest is sponsored by the Rhode Island National Guard. The competitive aspect of the exercise builds camaraderie and esprit de corps among the U.S. and International Community.

Competing teams in 2015 are from all over the world, including Canada, Germany, Italy, Britain, South Africa and others.

Teams consist of 4 jumpers and 1 alternate. The competition is for the jumpers to land as close to a big orange X in the middle of the drop zone. Judges time them from when they leave the aircraft to when they reach the X. Winners are based on the fastest individual time and the team with the best time combined.

The Rochester aircrews from the New York Army National Guard have support Leapfest as a way to improve their crew training and static line jump proficiency for the past six years.