Central Trust building to be recognized in May 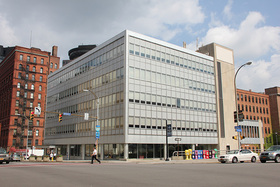 ALBANY, NY (04/17/2013)(readMedia)-- The Preservation League of New York State has selected The Central Trust Building in Rochester to receive an award for Excellence in Historic Preservation.

"Rochester has an impressive collection of buildings in the International style, and the long-vacant Central Trust may be the best example," said Jay DiLorenzo, president of the Preservation League. "Retrofitting the original sash system in the curtain wall to meet modern energy codes and standards, while technically challenging, was handled in an appropriate and sensitive way. The use of State and Federal rehabilitation tax credits to offset the cost of restoring this building for mixed commercial and residential use truly makes it an example that should be an inspiration to other developers."

Constructed in 1959, the former Central Trust Building is the "youngest" building in Rochester to benefit from rehabilitation funded by state and federal tax credits. Painstakingly adapted to a new use by Bero Architecture, the building now stands as a proud recipient of the title "Rochester's Best Example of 1950's International Modernism." This project has not only proved that preservation can balance multiple interests, but that it can also be used to promote a variety of positive objectives, including bringing a post-war-era piece of period architecture into the twenty-first century.

According to John Page of Bero Architecture PLLC, "The Central Trust project is the beneficiary of the convergence of many factors including a development team with a solid record of rehabilitation success, the assistance of an enlightened SHPO, and a budding interest in newly eligible mid-century modern architecture. We're gratified to have this project acknowledged by the Preservation League of New York State."

"As we launch our 40th Anniversary celebration in 2013, the Preservation League is looking forward to exploring not just the past, but the future of historic preservation. Many of the 2013 award winners provide valuable examples for other practitioners by incorporating energy efficiency techniques, adaptive reuse strategies and Federal and State Historic Rehabilitation Tax Credits," said DiLorenzo. "Each year, we are impressed by the number and variety of laudable nominations, and this year was no exception. We are delighted to celebrate the renovation of the Central Trust Building in Rochester and to commend James Philippone and Ben Kendig, Owners, for their stewardship."