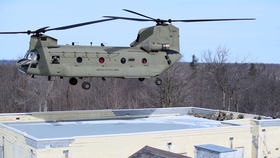 WHO: Twenty New York Army National Guard Soldiers assigned to Detachment 1 of B Company 3rd Battalion 126th Aviation Regiment. The unit flies the CH-47F CHINOOK heavy lift helicopter. This is the third deployment to Afghanistan for the unit.

WHAT: A mobilization and deployment ceremony held at the Army Aviation Support Facility #2 in Rochester for the Soldiers and their family members. The Soldiers will depart for training at Fort Hood, Texas and are expected to deploy for nine months in Bagram, Afghanistan, following their post mobilization training.

Imagery opportunities include the ceremony, and Soldiers interacting with family members. There will be opportunities to interview leaders, Soldiers and families.

The detachment-the other half of the company is part of the Maryland Army National Guard based in Edgewood, MD -- deployed to Afghanistan in 2007 and 2008.

The company was recognized as the Army National Guard aviation unit of the year for 2008 by the Army Aviation Association of America (known as Quad A) for the company's accomplishments in Afghanistan, including participating in the largest Air Assault operation in that country since 2002.

In 2009 the detachment's pilots and other Soldiers trained Canadian Forces pilots to operate the CH-47 because all of that country's CH-47s were already deployed to Afghanistan. The detachment also sent Soldiers and helicopters to assist in the response to Hurricane Katrina in 2005.

In June 2011 a helicopter assigned to the company plucked a motorboat stuck in the Niagara Falls rapids from the lip of the falls before it could go over.

In August and September 2011 CH-47s assigned to the detachment were used to move Federal Emergency Management Agency supplies during the National Guard's response to Tropical Storm Irene.

Following Superstorm Sandy in November 2012 the Soldiers of Company B once again used their CH-47 helicopters to move critically needed supplies from other locations to New York City during the New York National Guard response to the storm.

In 2012 and 2013 the Soldiers deployed once again to Afghanistan to move troops and supplies across the country.

The unit will deploy to the mobilization site with four CH-47 helicopters for training. One helicopter will remain in Rochester for training and emergency response purposes.

The CH-47F is the Army's largest helicopter and can lift more than 30 Soldiers and carry 28,000 pounds of cargo. The 98-foot long, twin rotor helicopters are invaluable for moving troops and equipment in the mountains of Afghanistan.

The CH-47F, the latest model of the CH-47 features a digital "glass cockpit" instrument array which replaces many dials with integrated computer readouts. Known officially as the Common Avionics Architecture System, the array of computer readouts incorporate information for the aircraft pilots in an easily managed format. The new digital readouts were designed to reflect lessons learned in combat in Iraq and Afghanistan.