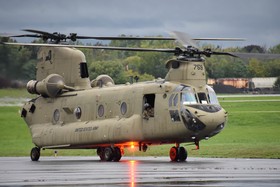 A CH-47F flown by the New York Army National Guard prepares to leave for Florida from Rochester on Wednesday, Sept. 28 to assist in the response to Hurricane Ian

The aircraft and Soldiers are being sent to assist the Florid National Guard in responding to Hurricane Ian, which is hitting the state today.

The two CH-47s, are assigned to B Company of the 3rd Battalion, 126th Aviation Regiment which is based at Army Aviation Support Facility 3 at the airport.

The two aircraft are being sent to Florida through an Emergency Management Assistance Compact request for assistance from the state of Florida to New York.

The aircraft will remain overnight in Greenville, North Carolina and are due to arrive in Jacksonville on Thursday.

The aircraft and Soldiers will come under the control of the Florida National Guard and provide airlift support as required.

The New York Army and Air National Guard have deployed personnel and aircraft to assist during huricane responses in the past.

The team based out of San Juan, Puerto Rico and conducted missions in the U.S. Virgin Islands. The New York Air National Guard crews assisted in mission that rescued 1,582 Americans from the joint French and Dutch-administered island of St. Maarten.