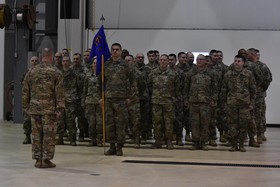 Soldiers from Charlie Company, 1st Battalion 171 General Support Aviation Battalion during their farewell ceremony in January of this year.

The Soldiers, members of Charlie Company of the 1st battalion 171st General Support Aviation Battalion, are conducting demobilization at Fort Bliss, Texas after arriving there late on Nov. 7. Two of the Soldiers remained behind to assist incoming troops with the transition and will return to the U.S. later.

The 46 Soldiers are expected to return to their homes in New York around Nov. 22.

Charlie Company is a medical evacuation unit which flies the UH-60 Black Hawk air ambulance helicopter. The company is based at the Patriot Way Armory and the Army Aviation Support Facility at the Rochester International Airport.

The unit mobilized for deployment on January 2, 2019 and deployed to Afghanistan after 45 days of training at Fort Bliss.

The company provided medical evacuation and personnel recovery for Coalition units training and advising the Afghan Army and police in the south, southwest and western areas of Afghanistan. This covers about half the country.

Three of the Soldiers became fathers during the deployment.

In 2012 and 2013 43 members of the company, which was then Company F of the 1st Battalion, 169th General Support Aviation Battalion, served in Afghanistan.

In 2018 the unit deployed two helicopters and crews to North Carolina in the aftermath of Hurricane Florence. The unit also responded to Hurricane Katrina along the Gulf Coast in 2005, and Tropical Storms Lee and Irene here in New York in 2011 and Superstorm Sandy in 2012.