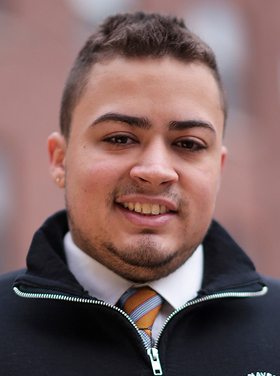 ST. BONAVENTURE, NY (03/17/2014)(readMedia)-- St. Bonaventure University senior Freddy Alvarez is designing the lighting for "42 Shakes: A Work in Progress" as part of his senior capstone.

The SBU Theater production, which explores the meaning of life through the works of William Shakespeare, is scheduled March 21 and 22 and March 27-29. Each show begins at 7:30 p.m. in the Garret Theater on campus.

A theater and journalism and mass communication major from Bronx, N.Y., Alvarez explained how he got involved with the play while creating the light design as part of his capstone.

"We were in class deciding what type of show we wanted to do and when we decided we were going to do a devised-theater project, Prof. Becky (Misenheimer) said it would be a perfect time to add my creativity to the show as her lighting designer," Alvarez said.

Alvarez said the opportunity allows him to explore his creativity with lighting design for theater.

"It gives me the ability not to only focus on acting, but to also focus on my creativity and think outside the box with lighting-design options for the show," Alvarez said. "When the opportunity came up, I knew I had to take it."

Rebecca Misenheimer, director of "42 Shakes: A Work in Progress," said she is excited to see how Alvarez's work for his capstone and documentary will come together for the performance.

"This is Freddy's first lighting design ever, so I look forward to seeing how his work is shown on stage," Misenheimer said. "It'll also be great to see how the documentary reflects the work of the cast in the show."

Alvarez is also creating a documentary about "42 Shakes," which illustrates how the production will come together. The documentary isn't included in his capstone, but he will use it as a résumé builder.

"I thought it would be interesting to document the process on what it's like to work on a production in devised theater because every member of the cast is able to put in their two cents while we are developing the show," Alvarez said.

Alvarez said the most difficult part of using this play for his capstone is setting aside time to work on different projects for the production.

"The most difficult part is deciding how to separate different jobs," Alvarez said. "I work on both the carpentry and lighting, so it's hard to pick what part of the project I should work on first."

Alvarez offered advice to students who have never seen a devised-theater production before.

"For a show like devised theater, it's important to keep an open mind," Alvarez said. "My advice for students is to try thinking abstractly, and don't take everything too literally because we want students to formulate their own ideas of what the meaning of life is."

Tickets are $8 for the public, $6 for SBU employees and students. Free student rush tickets will be available on a limited basis one hour before curtain at the Garret Theater box office, one ticket per valid student ID, in-person only.