Colton resident hand builds a car that appeared in "Total Recall" to tie for the top award in a national competition. 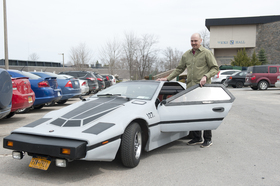 Bartlett is a learning systems manager for SUNY Canton OnLine and a 2004 alumnus who loves to make modern technology more efficient. He tied for the Most Fuel-Efficient Vehicle award in the Toyota Green Grand Prix Doris Bovee Memorial Road Rally, held April 11 at the Watkins Glen International racetrack. He entered with his modified Urba Centurion, which was originally designed by Robert Q. Riley.

"The Centurion is built on a 1966 Triumph Spitfire frame with a custom body made with fiberglass over foam," Bartlett said. "It runs on a three-cylinder Kubota diesel engine and can hit 65 mph. Attention to detail enabled the Centurion to rightfully earn its name on one of the most prestigious racetracks at the most unique green car and driver event on the planet."

During the first stage of the challenge, he and a passenger drove on the racetrack for over 100 miles against more than 40 other contestants. The award was determined by calculating time, distance and fuel economy of each car. He ultimately tied with a completely electric vehicle. "The competition is a challenge of your technology, your ability as a driver and your car," Bartlett said.

While building the Centurion, Bartlett modified the retro wedge-shaped design to be more aerodynamic, which gave him an advantage at the Green Grand Prix. The entire car is approximately 41 inches tall and the driver's seat is about four inches above the road. He said the car performed better than taller, heavier, commercially produced vehicles during the rally because of its design.

The magazine article that inspired Bartlett 30 years ago now hangs on the wall above his desk. Early testing of the car began with hopes of meeting the 128 mpg touted in the article. The small displacement engine coupled with the low weight and custom gearing make it a desirable alternative to larger cars, especially when diesel fuel costs more than $4 a gallon.

His award came with a $1,000 prize. Bartlett donated all of his winnings back to the Green Grand Prix, which is a non-profit corporation. Robert Gillespie, Chairman of the Green Grand Prix said the mission of the event is educational and is used to promote sustainable transportation technologies. "This event is truly something I can stand behind," Bartlett said.

The fuel-efficient Centurion had a big-screen debut. A version of it appears briefly throughout the 1990 movie "Total Recall" starring Arnold Schwarzenegger.

"As far as I know there are only three of these vehicles in existence," Bartlett said. "One is the car used in the movie and it is in California. Another is in the Lane Motor Museum in Nashville, [Tenn.], and the other is the one that I built."

Bartlett acquired the original wheels used on the "Total Recall" car for his own vehicle, but didn't use them for the race due to their excessive weight. He also prepared for the race by dressing in a lightweight jogging suit and using a two-gallon fuel tank to reduce the weight of both the driver and vehicle. "Every pound matters when you are working with a 17 horsepower engine," he said.

An avid do-it-yourselfer, Bartlett previously built a diesel motorcycle which averages 115 mpg. He also made a hybrid-electric trike that combines human and battery power. He lives off-grid in Colton and powers his home with solar panels and wind turbines. "The whole thing is one big science experiment," he said. "Once you start, you can't stop."

The Centurion is one of Bartlett's daily-use vehicles and can often be seen in SUNY Canton's Parking Lot 5.