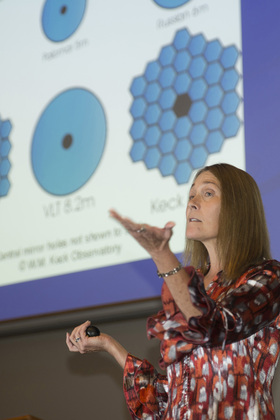 CORTLAND, NY (09/28/2015)(readMedia)-- Physicists all over the country have been closely scrutinizing their classrooms and laboratories to locate that seemingly rarest of molecular bodies in the universe: female future physicists.

The old quip doesn't apply to SUNY Cortland, however.

The American Physical Society ranked the College as having the sixth largest fraction of female undergraduate physics degree majors at master's degree granting institutions between 2011 and 2013.

And the College has moved up quickly from being tied at 13 as recently as the 2010 and 2012 data collection cycle, according to the society's data. The scholarly association gets its information from the U.S. Department of Education's Integrated Postsecondary Education Systems (IPEDS), established as the core postsecondary education data collection program for the National Center for Education Statistics.

Put another way, with 58 declared physics majors at the College, about 23 percent of whoever shows up in class on any given day is likely to be female, according to Moataz Emam, the Physics Department chair since last fall.

"In the broader sense, I would like for more people to be interested in the sciences," Emam said. "There was a boom after the second world war, through the 1970's, then a drop, when there was less scientific inquiry and discovery. Now, it's growing and we're part of a trend in a new interest in physics programs."

"Because of all the challenges to women in physics, I think it's very encouraging that we're seeing these results," said Melissa Morris, an associate professor in the Physics Department.

If that number seems at all disappointing, consider that by comparison, the average American college physics classroom contains far fewer females, not an encouraging sign for America in terms of keeping pace in the sciences with other countries.

there are many factors. Some are more anecdotal than empirical to explain why SUNY Cortland's female undergraduates are orbiting this particular academic universe at this point in time, according to Emam.

He has noticed that today's young women continue to gravitate toward professions that combine the science with teaching.

"SUNY Cortland continues to be the only SUNY institution to offer a degree in adolescent education in physics and mathematics," Emam said.

Morris agrees. She thinks women can also thrive in the practical application of physics to other fields.

"Physics is probably the easiest science to lead to employment in any field," said Morris, who noted the Central Intelligence Agency (CIA) once recruited her for her background in astronomy. "You can go into medicine, medical equipment, computer chip design. Even if the job has nothing to do with physics, the degree indicates you have problem-solving skills."

"There is a greater consideration by today's student that the discipline overlaps with everything else - history, biology, astronomy," Emam said.

The Physics Department also rides the wave of an overall increased interest, incubated by the news media, in the STEM fields of study - science, technology engineering and math.

The physics of environmental sustainability is a dual focus for many students as well as the public. And with that in mind, Brice Smith, associate professor of physics, for example, has given many community talks on how individuals can reduce their carbon footprint, with the potential to cause a reaction in the mind of a future student.

In terms of master's degrees, which are not part of the gender statistics, Smith's brainchild, the professional science master's degree in sustainable energy systems, has enjoyed early success.

"That (new) program has been running for two years," Emam said "It has pushed our enrollment of master's degrees in physics from zero to 16. A good percentage of majors are women."

As recently as 1995, SUNY Cortland graduated approximately 16 physics majors. So the explosion in number of females in physics at the College might reflect that more of both men and women have chosen the field of study.

"The undergraduate numbers have roughly doubled in the last five years," Emam said. "I think the College has done a much better job advertising that we are here.

"We've done a good job recruiting at Cortland-area schools. We've been able to attract students locally who are very good."

Last spring the Tech Savvy Conference for Girls reached many young females, according to Emam. Presented with assistance from the American Association of University Women, the event introduced secondary school age girls to faculty and staff in many STEM disciplines. The department additionally offers close to 70 events per year with local schools, mainly involving the Bowers Hall Planetarium.

Promoting the discipline at SUNY Cortland also gets a boost from building a new planetarium to replace the outdated one torn down during the $43 million addition project, Emam noted.

"There was a strong push from the sciences to get a new planetarium as a research, teaching and recruitment tool," he said. "We're working to get other departments (outside the sciences) to use it. It's something like an IMAX theater but even better."

Math and engineering are closely related disciplines to physics, and there is rising interest in the College's Physics leading to the 3 + 2 Engineering Program, which bestows baccalaureate physics and engineering degrees on a student who completed three years at Cortland and two years at a cooperating engineering school elsewhere.

"At open houses, it's the program that I get asked about the most," Emam said.

Most everyone is interested in the planets and the Solar System. Morris teaches Introductory Astronomy with Laboratory, a general studies course that captures the attention of its predominantly non-major students.

"There are usually around 70 students in the class and it's about 50-50 men and women," said Morris. "It's the one area of physics that is equal between male and female. The students enroll in it thinking it's only about the patterns of stars and then find out there's a lot of other science involved.

"But it may be the only science course they will take. And I'm really out to impress on the students what science is and what it's not."

Morris finds women must overcome false assumptions about their abilities or lack thereof.

"There are societal impressions that men are more talented at math and science," says Morris, which we know are false impressions.

Morris herself competed against a roomful of Calculus classmates as the only student who hadn't taken high school calculus.

"I struggled the whole way," she said. "Not because I was female, but because I was less prepared than my classmates. But I knew there was a point where I wouldn't have to do the calculations by hand. I knew that life is about practical applications. I could learn to program a computer to 'do the math.' The important thing is to understand the principles behind the equations. In this way, I can relate to my students, male and female, who are nervous about science or math."