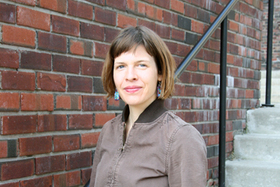 Karyn Scott, a SUNY Cortland community health major and mom of five young children, won a scholarship reserved for only 10 recipients across the country.

CORTLAND, NY (09/30/2015)(readMedia)-- There likely will come a time when Karyn Scott's children need advice on time management. And when they do, they should look no further than their superhero mom - a dedicated SUNY Cortland non-traditional student by day and the tireless caretaker of five children under the age of 10 the rest of the time.

Perhaps most notably, Scott is the recent winner of a prestigious Alpha Sigma Lambda scholarship, a $2,500 award reserved for only 10 recipients from across the country. The national honor society recognizes dedicated non-traditional students like Scott who are successfully continuing their college educations while balancing other important obligations.

SUNY Cortland defines its non-traditional undergraduate students as those who are at least 24 years old or have had an interruption or delay in their education since high school. Approximately 300 of them currently study at the College.

"I'm not usually a crier, but I'll admit I had a tear in my eye when I learned I had received the award," she said. "I felt honored ... very, very honored."

The award, which is based on leadership qualities, academic achievement and personal triumphs among other criteria, found a worthy recipient in the 36-year-old community health major. Besides her family commitments, Scott carries a full course load of credits with a 3.93 grade point average. That sustained excellence has earned her at least Dean's List distinction every semester, regular recognition among Phi Kappa Phi academic honor society members and several different individual awards and scholarships from the College.

From 2002 to 2006, Scott served in the U.S. Air Force, where she became an award-winning honor graduate. She's been taking classes at SUNY Cortland since 2010 as a beneficiary of the Montgomery GI Bill.

"I was in the military, so I'm used to routine and structure," she said with a laugh. "With our family, in order for everything to work out for everybody, we focus on working together as a team."

Scott and her husband Ben, who works at the Hancock Field Air National Guard base in Syracuse, N.Y., have five children separated by approximately two years each; the youngest turned one in August and the oldest is 9 years old. The family resides in Brooktondale, N.Y., which is roughly a half-hour southwest of Cortland.

On school days, the oldest children are off to school by 7:30 a.m. Scott said she usually attempts to be in bed by 10 p.m., which means time management and productivity define the hours in between. The key to success is balance, she said.

"I'll try to do homework while the kids are napping or before they wake up in the morning," she said. "And I try to support them in all of their activities and school functions too. Some days are tougher than others, but family always comes first."

Not surprisingly, Scott hopes to work with youth in a community health setting such as a wellness center or a school after she graduates. She's currently tackling her final semester of classes at SUNY Cortland and will complete field work in the spring to finish her degree.

"If you start children off at an early age and teach them about health - mental, emotional, physical - they carry it on into adulthood and teach their families," said Scott, who previously earned the College Health Department's Leonard T. Gath Award recognizing leadership and humanitarian concern for the safety and well-being of others.

She always finds ways to teach children, even when it means leading her own by example.

"It can be tough juggling things sometimes," Scott said. "But it really shows them that you can learn no matter how old you are and that pursuing an education is important."