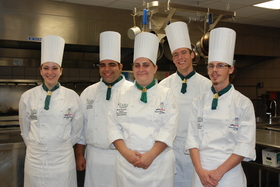 Competing against three other teams, Delhi earned a gold medal en route to winning the competition by two points. The margin of victory ranks among the largest in the event's history. This is the team's first national title and Delhi is the first college in New York State to ever win the ACF National Championship.

"This is a tremendous accomplishment by our students, their coaches and team," said SUNY Delhi President Candace S. Vancko. "They are talented, dedicated and a highly professional group who have made SUNY Delhi and our alumni very proud."

At the national competition, teams were challenged to prepare a four-course signature menu, 24 portions of each course, in three hours and 20 minutes and 80 minutes to plate and serve. The winning menu featured:

"This title is for the previous four teams who poured their heart and soul into competing at the nationals for SUNY Delhi," said Chef Tom Recinella. "It's as much a win for them as it is for the current team, and it provides a storybook ending for the documentary."

The Delhi hot food team's rise to champion status has been documented by a full-length film, "Mise En Place." The documentary, produced by Kent Garrett Productions, chronicles the work of Delhi's team as the members compete, perform community service, and grow together as a family. It is due to be released Summer-Fall 2011.

In order to travel to Anaheim for the national competition, Delhi's team raised funds by hosting 20 special luncheons featuring the winning menu for the campus and community. The MARK Project facilitated a $5,000 matching grant from the A. Lindsay and Olive B. O'Connor Foundation which, with the team's hosting of a fundraising opening dinner, resulted in $10,000. In addition, $1,000 was donated by the American Academy of Chefs (AAC), ACF's honor society, and over $1,000 was given by R.L. Schreiber, Inc. in financial support for the convention registration. Other donations poured in from supportive alumni and ACF chapters from across the Northeast region.

The American Culinary Federation, Inc., established in 1929, is the premier professional organization for culinarians in North America. With more than 20,000 members spanning 225 chapters nationwide, ACF is the culinary leader in offering educational resources, training, apprenticeship and programmatic accreditation. In addition, ACF operates the most comprehensive certification program for chefs in the United States. ACF is home to ACF Culinary Team USA, the official representative for the United States in major international culinary competitions, and to the Chef & Child Foundation, founded in 1989 to promote proper nutrition in children and to combat childhood obesity. For more information, visit www.acfchefs.org.

SUNY Delhi's culinary arts program has long been recognized as one of the best in the country. The program offers students a firm foundation in which to start their careers as culinary professionals. It progresses through basic skills dealing with Garde Manger, baking, sauces, stocks, etc., to the capstone course, Signatures by Candlelight, a full service fine dining restaurant that is open to the public and operated by SUNY Delhi students. In addition to the core classes, there are numerous culinary electives offered to help each student customize their portfolio of education. Depending on their interest or direction in the field, students can choose from electives such as advanced meat cutting, culinary competition, advanced pastries and confections, and culinary sculpting, which uses 300-pound ice blocks made on campus by culinary students in the college's own ice sculpting lab.