Seventh Regiment Military Movement Turned Into a Celebration on April 19, 1861

New York's "Silk Stocking" Militia Regiment Marched Off to Save Washington 150 Years Ago. 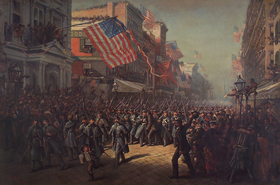 The Thomas Nast painting "The Departure of the Seventh Regiment to the War" depicts the frenzy that gripped New York City when the unit departed. (NYS Military Museum)

"New Yorkers cheered and applauded as the Silk Stocking Regiment marched through the city. The line of march was a perfect ovation. Thousands upon thousands lined the sidewalks. It will be remembered as long as any of those who witnessed it live to talk of it, and beyond that it will pass into the recorded history of this fearful struggle," the author of the "Third Annual Report of the Bureau of Military Statistics of the State of New York " remembered in 1866.

" The regiment marched not as on festival days -- not as on the reception of the Prince of Wales---but nobly and sternly, as men who were going to the war. Hurried was their step --not as regular as on less important occasions. We saw women -- we saw men shed tears as they passed. Amidst the deafening cheers that rose, we heard cries of 'God bless them!' And so along Broadway and through Cortland street, under its almost countless flags, the gallant Seventh regiment left the city," the book says.

On April 15 President Abraham Lincoln had called for 75,000 militiamen-Citizen Soldiers who answered to the state Governors and trained in their spare time-to put down what had become a rebellion of Southern states against the federal government. The units were to serve for three months.

On April 16 the New York Legislature voted to call out the state militia and Militia Colonel Marshall Lefferts, the commander of the Seventh Regiment, one of New York City's oldest and most famous militia units, started getting his men ready to go to war.

Established in 1806, the Seventh Regiment was known as the "Silk Stocking Regiment" because the ranks were full of socially prominent New Yorkers. Names like Vanderbilt, Tiffany, Van Buren, Fish, Gracie and Hamilton were all over the roster. The soldiers wore custom-fitted uniforms, looked good in parades-which they frequently took part in-and were expert at drill and ceremony.

The Seventh Regiment, though, was also one of the few New York Militia units at full strength (it was an honor to be allowed to join) and with almost enough equipment to go to war. Even then, it took another $1000 from the New York City Chamber of Commerce to fully equip the regiment to go to war.

So on April 19 the 1,050 men of the Seventh Regiment mustered at their armory in Tompkins Market-they occupied two floors above butchers, green-grocers, fishmongers and other shopkeepers-and prepared to head out to defend Washington and the newly inaugurated president against the Confederate Army.

Each man wore a grey uniform and a sky-blue overcoat with a knapsack and one rolled blanket. They carried extra boots, mess-kit, and one day's worth of rations. Each soldier carried 24 rounds of ammunition for his 1856 rifle musket made at the Harpers Ferry arsenal. The normal issue, though, was supposed to be 40 rounds.

At 3 p.m. on April 19 word hit New York City that the Sixth Regiment of the Massachusetts Militia, also on its way to Washington, had been attacked by a pro-Southern mob in Baltimore and had to fight its way through the city. Emotions, already running high after the shelling of Fort Sumter, reached a peak.

At 4 p.m. the Seventh Regiment fell into formation and set on its march through Manhattan, down Broadway, for the ferry slip. The regiment was going to take the ferry across the Hudson, and then catch a train for Washington.

Once across the Hudson the regiment made its way to Washington by train, and then by boat-to avoid the Confederate sympathizers in Baltimore-and then by train again, arriving in the capital on April 23.

The regiment was sworn into federal service on April 26 and served until June 2, when it turned its camp equipment over to another New York regiment and went home.

The Seventh Regiment was called to duty again in the Spanish American War and in World War I, where it was renumbered the 107th Infantry, and served as part of the 27th Division of the New York National Guard. In that war the 107th, serving with the British Army, penetrated the German defenses known as the Hindenburg Line.

Col. Trevor Jackson, the current commander of the 53rd Army Liaison Team, is willing to talk to interested reporters about his unit, its famous history, and how that history relates to the New York Army National Guard today. Contact Mr. Eric Durr at 518-786-4581 if interested.

More than 500,000 New Yorkers enlisted in the Army and Navy during the four years of the Civil War and 53,114 New Yorkers died. Throughout the period of the Civil War Sesquicentennial observance, the New York State Division of Military and Naval Affairs will produce short articles about New York's Civil War experience researched by the New York State Military Museum in Saratoga Springs.