Shams DaBaron AKA "Da Homeless Hero" to Mayor de Blasio: Why Won't You Meet With Me? 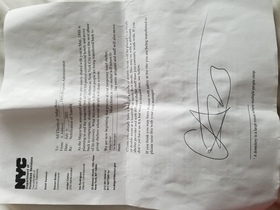 NEW YORK, NY (07/22/2021) (readMedia)-- Tonight, Shams DaBaron aka "Da Homeless Hero" attended an action outside of Gracie Mansion, where activists are sleeping out as they demand Mayor de Blasio protect and house homeless New Yorkers. As temporary hotel shelter residents receive notices (attached) that they will be moved to dangerous congregate shelters, DaBaron is requesting a meeting with Mayor de Blasio to share his life-threatening experience living in a shelter during the pandemic:

"I'm not going to sleep outside – I've done that on and off since I was 10 years old and I'm grateful to the allies who are sleeping outside tonight so I don't have to. But I should be inside of Gracie Mansion meeting with the Mayor and telling him about my experience living in congregate homeless shelters like those on Wards Island, where there are no services on site. I caught Covid living in a shelter, and almost died. Now is not the time to move people out of hotels and back into congregate shelters, where people sleep 30-50 and sometimes more to a room, where it is impossible to socially distance, and the majority of residents are not vaccinated. The Mayor could immediately implement Intro 146 right now, and open up a pathway to permanent housing for thousands of my homeless brothers and sisters. But instead, he wants to recklessly send them back to congregate death traps. Mr. Mayor, I asked you in September of 2020 to meet with me and I'm asking you again, will you meet with me?"

In solidarity with #JulyHomelessRights Month, activists are sleeping out at Gracie Mansion as they await an answer from the Mayor after he promised to look into the immediate implementation of Intro 146 last Friday on the Brian Lehrer show. As this legislation sits on the Mayor's desk, hotel residents are facing moves back to dangerous congregate shelters beginning Monday. Activists demand the Mayor stop the transfers and immediately implement Intro 146, which would raise the value of City FHEPs vouchers and provide a pathway to housing for thousands of homeless New Yorkers.

In congregate shelters, beds are 3 ft apart, in violation of CDC guidelines, in mass sleeping halls where social distancing is impossible. In the past few weeks, the Delta variant has become a major cause for concern, and now accounts for 75% of sequenced cases in New York City. And the 7-day average for cases has gone up 248% since June 22, while positivity rates have nearly doubled since July 7. Congregate shelters had high mortality rates during the first wave of COVID, and so activists warn that proceeding with these transfers will result in unnecessary deaths.