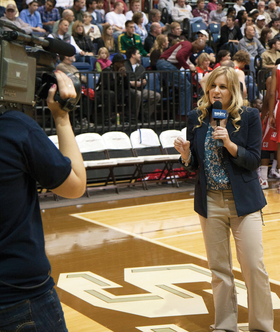 Lauren Adams, '11, and Amanda Ciavarri, '10, won the award - given annually by the Buffalo (N.Y.) Broadcasters Association - the last two years.

Shepherd, the most recent winner of St. Bonaventure's Hellinger Award, will receive a $1,000 award at the Buffalo Broadcasters Hall of Fame induction dinner in September.

Shepherd was the sideline reporter for SBU-TV sports for men's basketball for the last three seasons. She also broadcast women's basketball games and worked closely with the Sports Information Office contributing post-game basketball highlight packages, behind-the-scenes documentaries and her GoBonnies.com miniseries "Out Of Bounds."

The Buffalo Broadcasters Association created the award in 2008 in memory of Buffalo native Tim Russert, the NBC News reporter and "Meet the Press" host who was inducted into the BBA Hall of Fame in 2003.