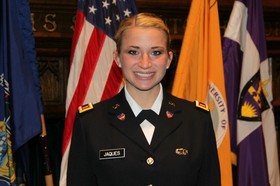 SCRANTON, PA (06/22/2012)(readMedia)-- Sidney Jaques of Rosemont, N.J., was among the 15 members of The University of Scranton's Class of 2012 who were commissioned as second lieutenants in the U.S. Army during the Jesuit school's commencement exercises. Jaques has been assigned to Adjutant General Corps.