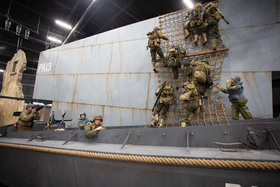 Photo Number one: See bottom of press release for caption.

LATHAM, NY (11/10/2020) (readMedia)-- When the National Museum of the United States Army opens its doors to the public on Veteran's Day 2020 this Wednesday, six New York Army National Guard Soldiers will take special pride in the role they played in that event.

The six men were the models for six of 63 life-sized Soldier figures that will bring exhibits in the museum to life.

Construction on the $200 million museum began in the fall of 2016. On Wednesday, Nov. 11 the museum will hold a virtual ceremony to celebrate its opening. It will be livestreamed at https://www.dvidshub.net/webcast/25129.

The National Museum of the U.S. Army, located on a publically accessible area of Fort Belvoir, Virginia, will be the first and only museum to tell the 245-year history of the U.S. Army since its establishment in 1775.

The six New York Army National Guard Soldiers served as models for the figures back in 2018. While Studio EIS, a Brooklyn company that specializes in making museum exhibit figures would normally hire actors to serve as models, the museum wanted to use real American Soldiers for their project.

"Having real Soldiers gives the figures a level of authenticity to the scene," Paul Morando the chief of exhibits for the museum explained at the time.

Three of the six New York Army National Guard Soldiers are in an exhibit that depicts Soldiers clambering down the side of a ship to land in Normandy on June 6, 1944.

The models of Vilardo, Gerdt, and Archibald inhabit the exhibit featuring Soldiers clambering down a cargo net into a landing craft off the Normandy beaches on D-Day, June 6, 1944.

The figure modeled by Archibald is climbing down the cargo net slung over the side of a ship into the 36-foot long landing craft known as a "Higgins boat."

The boats took their name from Andrew Higgins, a Louisiana boat-builder who designed the plywood-sided boats, which delivered Soldiers directly to the beach.

Vilardo was the model for a combat photographer. His figure is in the back of the boat taking pictures of the action.

Gerdt modeled a Soldier standing in the boat gazing toward the beach, thinking about what is to come.

The landing craft is so big that it, and three other macro artifacts, were pre-positioned in their space within the museum in 2017. The building was then constructed around those artifacts.

Kim, Morrison and Freed modeled figures that will are in an Afghanistan combat tableau.

They portray Soldiers from the 2nd Cavalry Regiment on patrol in 2014. Each Soldier depicting a different responsibility on a typical combat mission.

The figure based on Morrison is holding an M4 and scanning for the enemy.

Freed modeled a platoon leader talking on the radio.

Kim was the model for a Soldier operating a remote control for a MARCbot, which is used to inspect objects which might be improvised explosive devices.

The process of turning a Soldier into a life-sized figure started by posing the Soldier in the position called for in the tableau and taking lots of photos.

This allows the artists to observe how the person looks and record it.

Next, a model of the individuals face is made. A special silicone based material is used for the cast. The model's nostrils are kept clear so the subject can breathe.

The Soldiers were told what their character was supposed to be doing and thinking and asked to make the appropriate facial gestures.

The Soldiers were recruited for their look and in some cases their ethnic background.

The museum needed Soldiers who were leaner than the 21st Century norm to portray World War II GIs. Museum officials also wanted Asian-American and African-American Soldiers for the Afghanistan exhibit which is why Kim and Morrison were approached.

Next the artists sculpted the sections molded from the Soldier into a complete figure, dress and accessorize, and paint precise details on the face and skin; crafting it to humanistic and historical perfection.

Being a part of the National Museum of the United States Army is an honor, the six Soldiers said.

While their names won't be acknowledged on the exhibits, it will be great to know they are part of telling the Army story, they all agreed.

Freed said he was looking forward to visiting the museum. But because of the COVID-19 pandemic he doesn't anticipate going until the spring or summer, he added.

Visitors to the museum will have to acquire tickets on line and attend at specified times in order to prevent crowding, according to museum officials.

Vilardo, who has a nine-year old daughter, said she was pretty excited when he showed her photographs of him being turned into an exhibit figure.

"I told her it would be just like "Night at the Museum", he said referring to the Ben Stiller movie about museum exhibits coming to life, "and that we could go visit anytime."

Three New York Army National Guard Soldiers posed for figures that inhabit this exhibit of a Higgins Boat landing craft loading up for the landings in Normandy on D-Day, June 6, 1944 at the National Museum of the United States Army. Major Kevin Vilardo, served as the model for the photographer in the stern, while 1st Lt. Sam Gerdt modeled the Soldier waiting at the side of the boat. Sgt. 1st Class Nick Archibald served as the model for one of the Soldiers climbing down the cargo net. The museum opens to the public on Nov. 11, 2020. (National Museum of the United States Army, Duane Lempke)