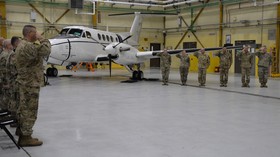 LATHAM, NY (11/06/2022) (readMedia)-- Six New York Army National Guard Soldiers who operate a C-12 transport plane based at the Army Aviation Support Facility in Latham, New York and are headed to East Africa later this month, were honored by their fellow Soldiers on Sunday, Nov., 6 during a ceremony at the facility.

Five of the Soldiers, who will be based at Camp Lemonnier in Djibouti, and transport personnel and equipment around the region, will mobilize for the deployment on Nov. 12.

Two Soldiers will trade places during the nine-month deployment, which is way six Soldiers were honored during the Nov. 6 ceremony.

The farewell ceremony was held prior to Nov. 12, because it was a drill weekend for the 42nd Combat Aviation Brigade, whose members wanted to attend the ceremony, according to Chief Warrant Officer 5, James McCauley, the detachment commander.

The Soldiers will report to Fort Bliss, Texas for additional training on Nov. 15. They are expected to depart for Camp Lemonnier by the end of November.

The C-12 Huron is the military version of the Model 200 Super King Air civilian executive aircraft. The plane has a crew of two-the pilot and co-pilot-and can carry seven passengers and cargo at a speed of 330 miles-per-hour.

The New York aviators will deploy alongside four Soldiers from the Kentucky Army National Guard.

They will be flying planes which are already located at Camp Lemonnier.

The Soldiers are members of Detachment 5 of C Company of the 2nd Battalion of the 245th Aviation Regiment which provides passenger transport for military and Department of Defense personnel.

. The battalion has detachments responsible for ferrying military passengers located at Army National Guard aviation bases across the country.

The Latham-based detachment's C-12 aircraft will be relocated to West Virginia while they are deployed.

The New York National Guard C-12 detachment will be the command element for the mission.

The Soldiers will be flying cargo and passengers to U.S. facilities across East Africa, McCauley said.

The detachment is expected to return to New York in August 2023.

They will join 1,100 New York Army National Guard Soldiers already on duty in the region.

The New York Army National Guard has also deployed 140 Soldiers to Germany where they are assisting in training the Ukrainian Army. Another 600 Soldiers are on duty in Kuwait.

More Soldiers will be deploying to Kuwait in 2023.

Photographs from the deployment ceremony can be found on the New York National Guard FLCKR Site here: https://www.flickr.com/photos/nyng/albums/72177720303480808