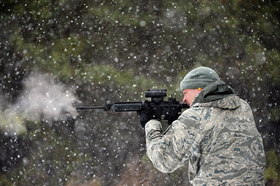 .His work will be entered into competition against submissions from Active Air Force and Air Force Reserve photographers in an Air Force-wide media competition whose results will be announced in March.

Muncy's military photographs have appeared in military and civilian publications and have appeared on the Air Force, National Guard, and Department of Defense websites.

"Staff Sgt. Chris Muncy is an outstanding photographer whose work highlights members of the 106th Rescue Wing, the Air National Guard and the entire joint team in action, defending our nation. We are very proud of his

The Military Photographer of the Year award requires the submission of five photographs showing a broad range of topics. The pictures he submitted ranged from a V-22 Osprey landing and discharging troops, to a member of the New York National Guard's 24th Civil Support Team conducting a training mission in full hazardous materials suit.

He took first place in the categories of pictorial and feature photography.

The pictorial photograph depicts members of the 106th Rescue Wing Security Forces Squadron using laser rangefinders at night at the Suffolk County Police Range in Westhampton Beach, N.Y. on May 7, 2015.

Muncy is originally from the Syracuse area, graduating from Jamesville Dewitt High School in 1999.He joined the Air Force in 2003, and originally served as a personnel technician in the Air Force Reserve before becoming a public affairs specialist in 2009.