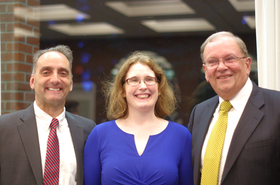 ALBANY, NY (07/26/2019) (readMedia)-- The New York State Defenders Association (NYSDA) announced a change in Board of Directors' leadership during its Annual Meeting and Conference in Saratoga Springs, NY, July 21-23. Executive Director Susan C. Bryant offered high praise and deep appreciation to Edward J. Nowak, who spent 39 years on NYSDA's Board, the last 29 of them as its President. "Ed's wisdom and work have been crucial to the Association's success over the many years he has served, and he has been invaluable during the last couple of years as NYSDA entered a period of generational change," she said. Bryant added her personal gratitude to Nowak, saying "I can't imagine being without the guidance he provided when I was first placed in a leadership role here." Nowak was the Monroe County Public Defender for many years, and remained on NYSDA's Board when he retired in 2007.

Incoming President John Turi, Rensselaer County Public Defender, was welcomed with enthusiasm. "John has been very active from the time he joined the Board in 2015," Bryant noted, "and I look forward to working with him as NYSDA moves forward." The organization's mission is to improve the quality and scope of public defense services provided to people who cannot afford to retain counsel and receive publicly-funded representation.