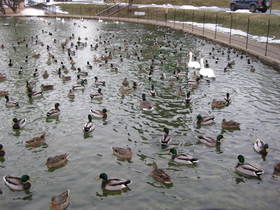 Ducks on the Pond

STAUNTON, VA (01/12/2010)(readMedia)-- Every Spring the Gypsy Hill Duck Pond attracts more public that any other facility or area in the Staunton park system. And every year the City's Parks and Recreation Department deals with the same ghastly situation involving the female ducks. In a perfect world the female duck is able to fend off and defend herself from the male duck's aggressive mating practices. But at the Gyspy Hill Park Duck Pond, the females find themselves weakened by an undermined defense system. The cause? Lack of nutritous food. The Culprit ? Bread.

Though the parks division feed the ducks the recommended all mash layer pellets on a dialy basis as well as making the pellets available for purchase via coin operated duck feeders around the Duck Pond, the pond visitors continue the traditional of feeding bread to the ducks and water fowl. This practice is especially volatile for the female ducks as their skeletal systems are weaked and they are unable to fend off aggressive male ducks during mating season, usually resulting in the female being injured. An average of 10-12 ducks are taken to the Virginia Wildlife Center each season. It is rare if any injured ducks ever make it back to the Duck Pond in Gypsy Hill Park.

To add to this precarious situation is the fact that there is an elevated and unnatural concentration of ducks and waterfowl at the Duck Pond enticed by the excessive food provided by passersbys. This leads to a large number of male ducks who attempt to mate one female at the same time. It is hard enough for the female to defend herself against one male duck, let alone several, and with a lack of strength and weakened skeletal system, the female ends up severly maimed or killed.

This year the parks system is hoping to educated the public about the hazards of feeding bread to the ducks and water fowl. Steve DeVenny, parks superintendent ,hopes the public will organize themselves much like a neighborhood watch and assist in protecting the female ducks by reminding Duck Pond visitors about the dangerous outcome of feeding our feathered friends an unhealthy diet of bread. Steve DeVenny said, "The Duck Pond at Gypsy Hill Park has been a touchstone for many generations of Stauntonians and visitors alike. Parents and grandparents who were taken to the pond by their parents and grandparents have kept the tradition alive through the years by bringing their families and friends to feed the various types of waterfowl that inhabit the fenced in enclosure. Breaking this tradition and convincing the public that this age old practice is harmful and not helpful to the duck and water fowl population is going to be a hard sell."