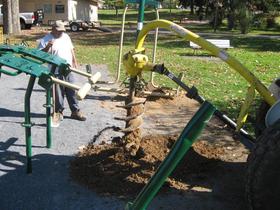 STAUNTON, VA (10/25/2011)(readMedia)-- The Staunton Parks and Recreation Department announces the tentatively scheduled opening of its new and improved Outdoor Fitness Center on Friday, October 28, 2011. The fitness center is located below the Garden Center and across from the Duck Pond in Gypsy Hill Park. There are 8 new pieces of fitness equipment that have been added to the existing stretching station for a total cost of $16,165.00. The new pieces of fitness equipment are: Single Chest Press, Double Leg Press, 2 Person Airwalker, Upright Stationary Bike, Combo Butterfly/Reverse Butterfly machine, Single Eliptical Cross Trainer, 2 Person Laying Leg Curl, Back Stretch machine.

The Staunton Parks and Recreation Department was motivated to lobby for the additional equipment based on sound research. In December of 2010 several studies revealed compelling results about the benefits of physical activity provided by parks and recreation services. One study conducted by Penn State based Dr. Geoffry Godbey showed the following:

The evidence is also clear that the public supports additional spending for park and recreation services and that such additional spending results in higher levels of physical activity health benefits. While many people experiment with forms of physical activity that are good for them but not pleasurable, they tend to stay with activities that they enjoy, often for decades. All these activities are commonly provided by park and recreation services at little or no direct cost to users of park features and supports is idea of higher use levels being linked to local park proximity .

In addition, Frances Kuo, Ph.D. from the Landscape and Human Health Laboratory of the University of Illinois at Urbana found that less access to nature is linked to exacerbated attention deficit/hyperactivity disorder symptoms, more sadness and higher rates of clinical depression. Environments with less green are associated with greater rates of childhood obesity. People of the same socioeconomic status who have greater access to nature have better physical health outcomes.

The Staunton Parks and Recreation Department is working toward a department goal of reducing childhood obesity by providing outlets for safe physical activity. In addition, the Outdoor Fitness Center is a value statement about fairness in providing parks and recreation services to all taxpayers and not just those who can afford a membership. If residents pay local taxes of any kind then they are subsidizing our parks and in turn deserve equal opportunity to benefit from their use. Finally and more broadly is the desire of Staunton Parks and Recreation to provide a means toward better health and quality of life via physical activity by providing close-to-home park and recreation resources.