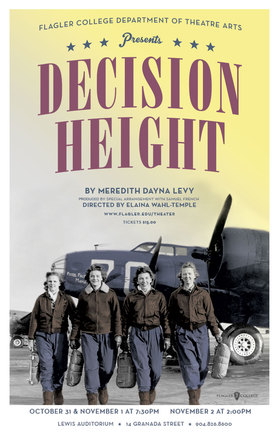 "Decision Height" tells the story of six Women's Air Force Service Pilots who flew aircraft during World War II. Their duties included transporting planes, as well as serving as targets for live ammunition training. Their contributions helped free male pilots for active combat during the war. Under recognized for their service and experiencing personal struggles, the play explores the deep bonds and friendships formed by these women.

Written by Levy during her senior year at Hollins University, the play went on to win Best Full Length Play 2013 in Region IV of the Kennedy Center American College Theatre Festival.

Admission is $15 with reserved seating with $10 tickets for veterans. Tickets go on sale Oct. 13 and can be purchased at the box office on Thursdays and Fridays between 2 and 5 p.m. at Lewis Auditorium or online at www.flagler.edu/theatre.