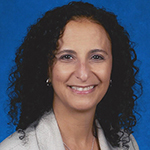 ALBANY, NY (03/26/2020) (readMedia)-- Dr. Alison Clark, principal of Stratford Road Elementary School in the Plainview-Old Bethpage Central School District, has been selected as the 2020 New York State Elementary Principal of the Year by the School Administrators Association of New York State (SAANYS) and the National Association of Elementary School Principals (NAESP). This award is given annually to a member of SAANYS and NAESP who is clearly committed to excellence, has programs designed to meet the academic and social needs of all students, and has firm ties to parents and the community.

Known as a principal who believes in strengthening school culture to build a positive environment, Clark feels strongly that "The learning we foster is about supporting and being kind to others. Our belief is one that supports and initiates growth of the whole child, academically, physically, socially, and emotionally." Stratford Road ES is not only the largest elementary school in the district, but also home to the largest English Language Learner (ELL) and Supplemental Educational Services (SES) populations, as well as the district's Autism Program. Commented Superintendent of Schools Dr. Lorna Lewis, "The success of this special population is due in no small part to the energy and support Dr. Clark gives to the program. Students and parents leave her building valuing the lessons of patience, charity, and kindness demonstrated there." The school hosts many events fostering inclusivity throughout the year, such as the annual circus, pay it forward, game days, gym helpers, peer buddies, and the kickoff welcome back assembly. In addition, students take part in community services projects by donating "Birthday Boxes" to Birthday Wishes, a local non-profit that provides birthday parties to children living in local homeless shelters. Over the years, more than 120 Birthday Boxes and over 400 gifts have been donated. Amanda Bodeker, grade 5, summed it up perfectly, "Dr. Clark puts kids before herself."

Considering herself the school's lead learner having earned her PhD while leading Stratford Road ES, she is also known as a mentor who cultivates leadership in others. She is an adjunct professor at SUNY Old Westbury, works with doctoral students on their dissertations at Concordia University, and has published numerous articles in educational journals. Commented Michael Rodgers, POB director of music and performing arts, "She has a disposition where she welcomes all and offers herself completely to help, listen, or support someone. She is a remarkable colleague who understands careers, trajectories, and believes in her team."

Clark received her bachelor of arts and master of science degrees from CUNY Queens College, her PD from Long Island University, and her PhD from Concordia University Chicago.

SAANYS represents nearly 8,000 school administrators, supervisors, and coordinators. As a professional association, SAANYS is committed to providing direction, service, and support to the membership in their efforts to improve the quality of education and leadership in New York State schools. SAANYS is affiliated with the National Association of Elementary School Principals (NAESP) and the National Association of Secondary School Principals (NASSP).

Posted Thursday March 26, 2020 at 10:31 am by School Administrators Association of New York State