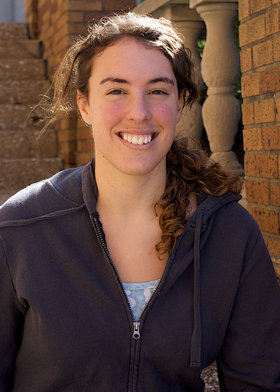 ERIE, PA (11/01/2010)(readMedia)-- From the campus of Mercyhurst College, the Big Island of Hawaii may seem worlds away, but for geology student Alexandra Farrell, whose dream is to study volcanoes, it's a lot more accessible than Mars.

Farrell, 21, a senior from Biglerville double-majoring in anthropology and geology, has been working with Dr. Nick Lang, assistant professor of geology at Mercyhurst, on a NASA-funded study of the oldest and most explosive volcanoes on Mars. That's pretty cool stuff, says the young woman who has been infatuated with volcanoes since childhood.

Still, studying volcanic terrain via remote sensing from high-resolution spacecraft images – while meaningful – is a little like watching a 3-D movie: close, but not really there.

So, last spring Farrell decided to apply for a weeklong summer field school at the University of Hawaii, where she could actually monitor an active volcano, observe a lava flow, sample molten lava and even measure its temperature.

It was a long shot, she knew, since among the admission requirements was that she be a graduate-level student. But, based on the impressive research she was doing at Mercyhurst and the recommendation of a former field school participant – her professor, Nick Lang – she made the cut. In fact, she was the lone undergrad in a cohort that included 16 graduate students from across the United States.

"It was amazing," she said of the experience. "I had seen Mt. Vesuvius and Pompeii before, and I was struck by their power and how they could change an entire landscape, but I had never been so close to an active volcano before Hawaii."

Among the structures she studied was Mauna Loa, the largest volcano on Earth in terms of volume and area covered, and one of the five volcanoes that form Hawaii.

"What was really exciting was watching active lava flows form new rock right in front of your eyes," Farrell said. "It made it easier for me to relate to how the structures I had studied on Mars may actually have formed."

While one might not think of Mercyhurst as a college at which to study volcanoes, Farrell said she had plenty of opportunity for hands-on experiences in both her fields of interest – archaeology and geology.

From visits to Meadowcroft Rockshelter, whose principal excavator is Mercyhurst's own Dr. James Adovasio, to archaeology field school in Florence, Texas, to fossil hunting trips, to Hawaii, Farrell said, "Mercyhurst gives you all kinds of opportunities to learn in and outside the classroom."