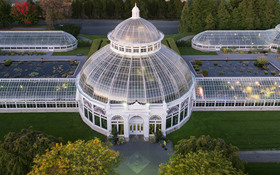 "The New York Botanical Garden is an iconic living museum, a major educational institution, and a renowned plant research and conservation organization," said Jay DiLorenzo, President of the Preservation League. "Founded in 1891 and now a National Historic Landmark, it is one of the greatest botanical gardens in the world and the largest of any major city in the United States. It is also a leader in historic preservation, with a peerless commitment to its iconic buildings and grounds."

The Botanical Garden has completed three 7-year strategic plans (1993–1999, 2001–2007, and 2009–2015). To fund the strategic initiatives called for in these plans, such as the key efforts listed above, as well as ongoing operations, $1.1 billion has been raised for "America's Garden." Eighty percent of that was from the private sector. The balance has been government funding for capital projects. These projects have revitalized the 250-acre museum of plants and have transformed it as a cultural attraction, research institution, center for education and publications, and community resource.

"We are honored to receive the award for Organizational Excellence in Historic Preservation and appreciate that the wonderful Preservation League of New York State has recognized our institution-wide preservation efforts here at NYBG," said Gregory Long, CEO and The William C. Steere Sr. President of The New York Botanical Garden. "We have been working for more than 25 years to restore the buildings and landscapes inside this National Historic Landmark - for today's visitors and for generations to come."

The awards will be presented at the Preservation League's Awards Ceremony in New York City at6:00 p.m. on Wednesday, May 9th at the historic New York Yacht Club, 37 West 44th Street.

"With our annual awards program, the Preservation League explores not just the present, but the future of historic preservation. Many of the 2018 award winners provide valuable examples for others by incorporating energy efficiency techniques, adaptive reuse strategies and use of Federal and State Historic Tax Credits," said DiLorenzo. "Each year, we are impressed by the number and variety of laudable nominations, and this year was no exception. We are delighted to celebrate The New York Botanical Garden for more than a century of preservation of the natural and built environment, and to commend all members of the staff and board for their leadership and vision."