The Tishman Building at 10 Lafayette in Buffalo to be honored 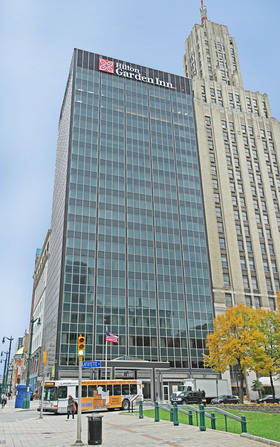 ALBANY, NY (04/27/2015)(readMedia)-- The Preservation League of New York State has selected the Tishman Building in Buffalo to receive an award for Excellence in Historic Preservation.

"This mid-century modern building provides a compelling counterpoint to the Hotel @ The Lafayette across the square, which received an Excellence in Preservation Award in 2013," said Jay DiLorenzo, President of the Preservation League. "The 20-story building opened its doors in 1959, and was acquired in 2011 for mixed-use redevelopment. It now boasts 18 market-rate apartments, 124 hotel rooms under the Hilton flag, and commercial office space and restaurants. The project leaders placed a high value on retaining the building's International Style character while bringing it up to modern functionality and maintaining exemplary standards for historic preservation."

A refined metal and glass tower designed by Emory Roth & Sons, Architects and constructed by Tishman Realty & Construction Company, 10 Lafayette is a singular presence in the Buffalo skyline. Iroquois Gas, later the National Fuel Gas Company, occupied the building until 2003when the corporation relocated to a suburban office park, leaving the downtown structure virtually vacant for eight years.

"I would say the biggest challenge was trying to bring a 1959-era building up to current standards for office and residential space," Jon Morris of Carmina Wood Morris said of the Tishman project. "Current energy guidelines for the exterior of the building also had to be met. That was accomplished by adhering new panels of double-paned glass to the interior glass. From the outside, it didn't change the look. Inside the 20-story building, there was plenty of flexibility for laying out hotel rooms, luxury apartments, and three floors of office space for the developer, Hamister Group, INC. The tricky part was the mechanicals. Before, it was a central system and everyone got the same heat and cooling, but now we've got all sorts of individualized mechanical systems installed in the existing foot of space between the ceiling and floor slab above. This project is a huge part of the momentum that is transforming Buffalo, and is a perfect example of adaptive reuse that benefits the entire community."

The awards will be presented at the Preservation League's Awards Ceremony in New York City at 6:00 p.m. on Wednesday, May 13th at the historic New York Yacht Club, 37 West 44th Street.

"With our annual awards program, the Preservation League explores not just the present, but the future of historic preservation. Many of the 2015 award winners provide valuable examples for others by incorporating energy efficiency techniques, adaptive reuse strategies and Federal and State Historic Rehabilitation Tax Credits," said DiLorenzo. "Each year, we are impressed by the number and variety of laudable nominations, and this year was no exception. We are delighted to celebrate the renovation of the Tishman Building and to commend Carmina Wood Morris for their leadership."