Theatre and film to merge for 'Macbeth' 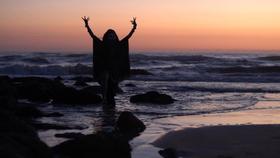 A video still from the Flagler College production of "Macbeth"

ST. AUGUSTINE, FL (10/08/2014)(readMedia)-- For the first time upon a Flagler College stage, theatre and film will merge together in a modern twist of the Shakespearean play, "Macbeth."

More than 30 students, alumni and faculty have joined forces to incorporate film alongside live theatre. The show will stay true to the Shakespearean language and Scotland setting, but will have added elements of Caribbean, Native American, and Spanish influences.

"One modern adaptation of Shakespeare is to take the original story and change the setting to see how the story and text have universal truth," said Assistant Director Keith Comley, a student at Flagler. "For instance, our version is textually in Scotland, but the look and feel of the set is a mythical Caribbean culture that is reminiscent of Ponce de Leon discovering Florida in 1513."

In addition to lights, sound, and live acting, video clips will be played throughout the show allowing the audience to witness scenes and character interactions that they normally would not encounter in the traditional portrayal of the play.

"I like the idea of using cinematic elements to tell the story and show the audience unseen parts of the play," said Director Britton Corry. "The camera is a tool you can use to create different looks that are radically different than the looks created on stage. Theatre is limited by the stage, while film can take you to multiple locations."

This artistic experiment may be new for the theatre department, but the end goal is a timeless concept.

"Theatre and film have the same purpose," said Comley. "To shine a light on the human condition and help people undergo catharsis."