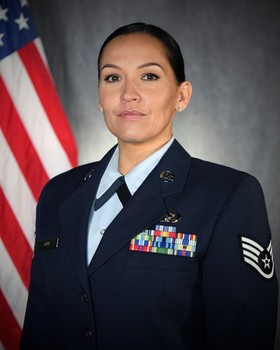 Cruz is assigned to the 109th Airlift Wing, based at Stratton Air National Guard Base in Scotia. She is an air transportation specialist in the wing's 109th Logistics Readiness Squadron.

Cruz was chosen for the honor by a board which evaluated candidates from the New York Air National Guard's five flying wings and its Eastern Air Defense Sector selected for their performance in 2021.

As an air transportation specialist, Cruz is responsible for processing passengers and baggage aboard all Department of Defense and civilian owned military aircraft in accordance with all applicable Air Force rules and regulations.

She has served in the New York Air National Guard since 2017.

During 2021, Cruz volunteered for a deployment to Ali Al Salem Airbase, Kuwait where she built pallets and checked in more than 27 tons of cargo. Additionally, Cruz deployed to Greenland to provide support for the National Science Foundation, where she moved over 141,000 tons of cargo and processed 133 passengers for 33 missions.

Cruz also volunteered to be part of Operation Allies Welcome, a mission to provide services to Afghan's evacuated by the United States prior to the Taliban takeover of that country. She deployed to Joint Base McGuire-Dix-Lakehurst in support of that mission.

She is currently serving on the New York National Guard's COVID-19 response mission.

"Staff Sgt. Cruz emulates the Air Force core value of service before self with her continual willingness to step up whenever the need arises," said Chief Master Sgt. Mark Mann, her supervisor in the logistics readiness squadron.

"Staff Sgt. Cruz is an asset to the Air Transportation career field, the Air National Guard and the United States Air Force. She is a natural born leader, and has a great career ahead of her. All of us within the squadron are extremely proud of her and her accomplishments," Mann added.

As the New York Air Guard's Airman of the Year, Cruz will compete against Airmen from the other 53 states and territories to be the best in the entire 101,000-member Air National Guard.

In civilian life, Cruz is a Rensselaer County corrections officer. She resides in Troy with her daughter.