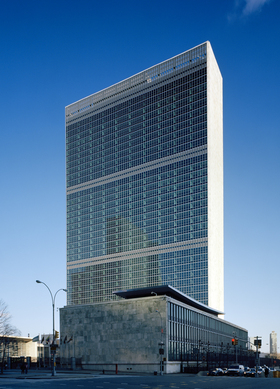 "These projects illustrate the broad range of preservation efforts in New York State," said Jay DiLorenzo, president of the Preservation League. "From the re-purposing of a handsome and understated neoclassical building on the Upper East Side, to a high-tech replacement of multiple buildings' aluminum and glass curtain walls, these award winners demonstrate that modern and green enhancements can be made while retaining character-defining properties. We commend them both for their efforts."

The Apple Store, Upper East Side is an adaptive reuse of Henry Otis Chapman's 1922 U.S. Mortgage and Trust building. The project included exterior restoration, reconstruction of historic finishes, sensitive alterations, and upgrades to building services. The project team is a veritable "who's who" of leaders in the preservation field, and their collective expertise is clearly reflected in the outcome.

"This project required a focus on reinterpreting and recreating the original qualities of the building," said Karl Backus. "We're quite happy with the outcome and proud of the team's work in restoring the grandeur of the space. We are honored to receive this recognition."

The glass and aluminum curtain wall façades of the Secretariat, General Assembly and Conference Buildings were replaced in kind, matching the original, under the United Nations Capital Master Plan. The project maintained the historic appearance of these significant mid-century buildings while providing a new state of the art high performance enclosure that exceeds current code requirements as well as meeting the UN's current security objectives. The project engaged a team of experts across a number of disciplines, and establishes a model for faithful reconstruction and celebration of the modern era curtain wall.

According to Robert Heintges, "The most gratifying reaction to the project's completion has been surprise that anything was done at all!"

"With our annual awards program, the Preservation League explores not just the present, but the future of historic preservation. Many of the 2016 award winners provide valuable examples for others by incorporating energy efficiency techniques, adaptive reuse strategies and Federal and State Historic Rehabilitation Tax Credits," said DiLorenzo. "Each year, we are impressed by the number and variety of laudable nominations, and this year was no exception. We are delighted to celebrate the rebirth of the U. S. Mortgage and Trust as the Apple Store, Upper East Side, and to applaud the masterful replacement of the glazed façades on the United Nations' General Assembly and Secretariat Buildings by giving these very different yet admirable preservation efforts the statewide recognition they deserve."