Keramos Hall, East 180th Street Station to be honored in May 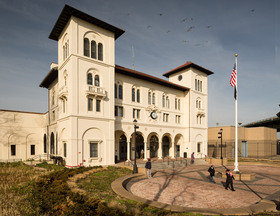 "These projects illustrate the broad range of preservation opportunities in New York State," said Jay DiLorenzo, president of the Preservation League. "From a family-owned company's restoration of a unique building in Brooklyn to the MTA's stewardship of a Bronx transit station, we commend these efforts to protect authentic examples of our past."

"Keramos Hall recalls the prominent industries in Brooklyn's Greenpoint neighborhood in the late 19th century – shipbuilding, china and porcelain fabrication and glass production," said Jay DiLorenzo, president of the Preservation League. "A whimsical addition to the street, the half-timbered Stick Victorian was built with an Italianate-style tower and Swiss Chalet-inspired pediments and brackets. Intervening years had taken a toll, with the original ship-lap siding covered in composite shingles and most decorative elements lost. The restoration of the façade has, in the words of the Pastor of The Greenpoint Reformed Church, 'improved the quality of life and dignity of the street.' "

Located at a prominent corner of the Greenpoint Historic District's main retail corridor, Keramos Hall resumes its place as a proud and important part of the streetscape. Restored to its traditional wooden structure in its original eclectic design, the Hall now encourages Greenpoint residents and visitors to take pride in their historic district and fosters a stronger sense of community in the area.

According to Joanne Tall of Kamen Tall Architects, "The restoration of Keramos Hall was a process of discovering a buried treasure. Along with the determined conviction of the owners, we were able to restore the uncovered historic fabric and replicate missing decorative elements via historic photographic research and the study of ghosting and remnants unearthed during the process. Thomas C. Smith designed and built an incredibly spirited building in 1887, and it is a great joy to see 'that building' on the streetscape once again."

"It is fitting that this handsome building be restored to its former glory in time for the centennial of its completion. Designed by Alfred Fellheimer of Reed & Stem, the station is a contemporary of the firm's better-known work, Grand Central Terminal," said Jay DiLorenzo, president of the Preservation League. "As a sparsely populated area on the edge of the city changed to a working-class neighborhood, maintenance and upkeep on this building was deferred, and the station fell into disrepair. Now, following a $65 million restoration, the Metropolitan Transit Authority welcomes Bronx residents and tourists en route to the Bronx Zoo and Botanical Garden to a beautiful and universally-accessible station."

Designed to compete with the bustling Grand Central Station, the East 180th Street was planned as a catalyst to kick-start the Bronx into something reminiscent of mid-town Manhattan. This project has restored the previous New York, Westchester and Boston Railroad (NYW&B) station to its previous grandeur in the style of an Italian villa. With the incorporation of ADA compliance, it is now able to be enjoyed by all.

According to Lee Harris Pomeroy, the President of Lee Harris Pomeroy Architects, "With this project, we had an extraordinary opportunity to restore a landmark building from the same period as Grand Central Terminal; a time of great optimism for the Bronx. The station building represents the ambitious legacy of JP Morgan, who championed the value of architecture along with the golden age of railroad development."

"As we launch our 40th Anniversary celebration in 2013, the Preservation League is looking forward to exploring not just the past, but the future of historic preservation. Many of the 2013 award winners provide valuable examples for other practitioners by incorporating energy efficiency techniques, adaptive reuse strategies and Federal and State Historic Rehabilitation Tax Credits," said DiLorenzo. "Each year, we are impressed by the number and variety of laudable nominations, and this year was no exception. We are delighted to celebrate the renovation of Keramos Hall and of East 180th Street Station, and to give two very different yet admirable preservation efforts the statewide recognition they deserve."