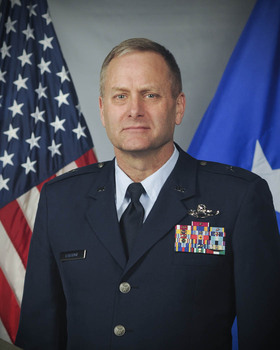 Members of the press are invited to cover the promotion of Brigadier Generals Timothy LaBarge, a Tupper Lake resident, and Thomas Owens, a Cazenovia resident.

WHAT: Promotion ceremony in which the two general officers will be promoted from brigadier general to major general by Major General Ray Shields, the Adjutant General of New York.

Interviews with Brigadier Generals Labarge and Owens about their military careers in the Air Force and New York Air National Guard and still and video imagery of the traditional promotion ceremony.

Members of the press must contact Col. Richard Goldenberg at 518-727-7314 for access to this secure military facility.

LaBarge graduated from St. Lawrence University in Canton, N.Y. in 1983 and received his Air Force Commission from the Officer Training School in 1984. He served eight years in the active Air Force and joined the New York Air National Guard in 1991.

Labarge was promoted to Brigadier General in 2016.

He served at Headquarters United States Air Force from 2006 to 2007 as a Staff Officer in the Air Force Directorate of Total Force Integration.

He has flown combat missions and combat support missions in support of Operations Desert Shield, Desert Storm, Iraqi Freedom and Enduring Freedom. He has also flow mission in Antarctic in support of the National Science Foundation.

LaBarge is a graduate of the Air Force Squadron Officers School, Air Force Command and General Staff School, the Air War College, the Joint Forces Staff College and received a Master of Arts in Military Studies/Strategic Leadership from the American Military University.

LaBarge and his wife Petra, live in Tupper Lake, N.Y. and have two daughters Lyndsay and Emily, a grand-daughter Tayler and a grandson TJ.

Global Strike Command is responsible for the Air Forces nuclear B-1, B-2 and B-52 bombers and Minuteman III missiles.

Owens received his commission in 1985 as a Distinguished Graduate of the Air National Guard Academy of Military Science, Knoxville, Tenn. After completion of pilot training, he served in numerous operational assignments flying the A-10, F-16, HC-130 and HH-60G in the New York Air National Guard.

He has also served as the Assistant Adjutant General for Air for New York National Guard and as Mobilization Assistant to North American Aerospace Defense Command Director of Operations.

His commands include the 138th Fighter Squadron, 174th Operations Group and the 106th Rescue Wing. Prior to his current assignment, the General served as the Assistant Adjutant General for Air, New York National Guard. He was promoted to brigadier general in 2016.

The New York Air National Guard consists of five flying wings operating 42 aircraft and the Eastern Air Defense Sector which is responsible for the air defense of the United States east of the Mississippi and the Washington D.C. Area.