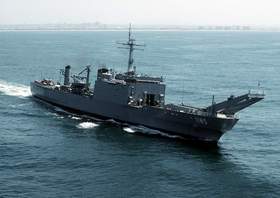 SCOTIA, NY (09/13/2011)(readMedia)-- The ship's bell from the USS Schenectady-- the namesake ship for Schenectady County-- that was decommissioned in 1993 and sunk as a target ship in 2004-comes to a new home in Scotia on Wednesday when a C-130 carrying the ship's bell and an escort lands at Stratton Air National Guard Base.

WHO: Lt. Commander Mark Junco, Commander of the Navy Operational Support Center, Schenectady, andmembers of the U.S. Navy Reserve and the 109th Airlift Wing of the New York National Guard .

WHAT: A 109th Airlift Wing C-130 carrying the bell of the USS Schenectady and a Navy Reserve escort will arrive at Stratton Air National Guard Base between 4:30 and 5 p.m. The bell will be displayed on the "quarterdeck:" of the Navy Operational Support Center area of the Armed Forces Reserve Center in Glenville which is home to units to the U.S. Navy and Marine Corps Reserve as well as the New York Army National Guard.

WHEN: Press should arrive at Stratton Air National no later than 4:15 p.m. on Wednesday, Sept. 14 in order to be in place to observe events.

Still and video imagery of military personnel and veterans of the U.S.S. Schenectady welcoming the bell to the Capital Region. There will be opportunities to interview members of the Navy and veterans.

Media members who wish to cover this event should contact New York Air National Guard Captain Cassandra Mastorakis at 518-344-2352 no later than 3:30 p.m. on Wednesday, Sept. 14 in order to obtain access to this secure military facility.

The USS Schenectady was a 523 foot-long Newport class Landing Ship Tank that was launched in 1969 and commissioned in June 1970. The 20 ships in this class were designed to unload tanks, trucks loaded with supplies and other equipment over a 40-ton bow ramp directly onto a beachhead in support of Marine landing operations. The ship had a crew of 14 officers and 210 enlisted Sailors and could transport 350 Marines as well.

It was the only ship ever named for Schenectady County or City.

In June 1972, off the coast of Vietnam, the Schenectady became the first ship of her class to fire at an enemy when the crew returned fire on North Vietnamese Army shore batteries which had opened up on the ship as she cruised along the course.

In 1993, the Navy sold, transferred and decommissioned all but two of the Newport class ships following a relook at the Navy and Marine Corps amphibious assault requirements.

The Schenectady was decommissioned in December 1993 and placed in the Naval Inactive Ship Maintenance Facility at Pearl Harbor until 2004.

In 2004 the Navy took the Schenectady out of storage, cleaned the ship up and rigged her to run under remote control. The ship was used as a moving target in Resultant Fury 05-01 and on Nov. 23 the Schenectady was sunk by a United States Air Force B-52 using a laser targeting device. The Air Force bomber had flown from Barksdale Air Force Base, Lousiana to the Central Pacific to test the ability of a heavy bomber to engage and destroy multiple enemy targets.