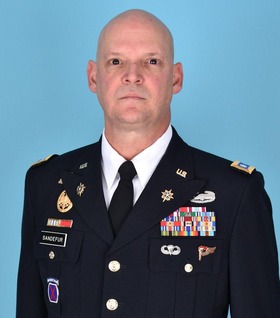 LATHAM, NY (07/30/2019) (readMedia)-- New York Army National Guard Lt. Colonel John Sandefur, a resident of Warners, N.Y. and a veteran of two Iraq deployments, will take command of the 2nd Weapons of Mass Destruction-- Civil Support Team, a unit which specializes in identifying chemical, biological, radiological and nuclear weapons, during a ceremony at Stratton Air National Guard Base on Wednesday, July 31. The unit is normally called a Civil Support Team.

Sandefur will replace Lt. Col. Aron Sacchetti who has commanded the unit since 2016 and will be moving into a new operations position.

Imagery of the traditional change of command ceremony and interviews with the incoming commander and other New York National Guard leaders.

For access to this secure military facility members of the press must contact Master Sgt. Willie Gizara at 518-344-2423.

The Change of Command Ceremony dates back to the days in which a military unit's flag marked its position in the line of battle. The colors were always near the commander, so troops knew where to rally on the battlefield.

Today the transfer of the colors marks a change in the unit and gives the soldiers their first opportunity to see and hear their new leader.

The change of command ceremony recognizes the accomplishments of the outgoing commander and the Soldiers who served under him. In addition, the ceremony identifies the new commander to the Soldiers, so they can follow him on the field of battle.

After his enlistment he served in the Army Reserves in Intelligence.

He moved to New York and joined the New York Army National Guard in 1997. He attended Officer Candidate School and was commissioned in Military Intelligence in 1999.

In 2004, he was selected as the Battalion Intelligence Officer for the 2nd Battalion 2, 108th Infantry and deployed to Iraq with the battalion.

After returning, he began his full-time military career with assignment as the Commander of the Central Region Counterdrug Taskforce. His successive assignments include Company Commander of Headquarters Company of the 27th Infantry Brigade Combat Team and commander of Company C of the New York Army National Guard's Recruiting and Retention Command.

He deployed with the 27th Infantry Brigade Combat Team to Kuwait as the brigade intelligence officer in 2014 and also served as the coordinator for the New York National Guard's State Partnership Program with the Republic of South Africa.

Sandefur also served as the intelligence officer for the 42nd Infantry Division in Troy.

Sandefur is currently enrolled in the Army War College distance learning program. He holds a Master's in Business Administration from Columbia College and is completing his thesis for a Master's of Science in Strategic Intelligence at National Intelligence University in Washington, D.C. He also holds a bachelor's degree in political science.

Sandefur and his wife Carol are relocating to Gansevoort NY and will celebrate their 25th wedding anniversary in November. They have 3 children, Allison, John, and James. James currently serves in the Marine Corps in Okinawa, working in the intelligence field.

Lt. Col. Aron Sacchetti spent the first 14 years of his career in the Massachusetts Army National Guard. He was commissioned in 1994 as an Infantry Officer and held various positions up through company commander as well as battalion staff positions in operations and supply.

Sacchetti served as the Massachusetts National Guard Information Operations Field Support Team as the Operations Officer from 2004 through 2006. From 2006 to 2008 Sacchetti was deployed to Kosovo for 18 months as Military Assistant to the Commander, Kosovo Forces.

Following his return from deployment in 2008, Sacchetti transferred into the New York Army National Guard and joined the 42d Infantry Division headquarters as a member of the G3 staff.

Between 2008 and 2014, he served as Plans Officer, Space Operations Officer, Liaison Officer and Senior Space Operations Officer. In 2011, Sacchetti was selected to serve as the senior full-time representative and Executive Officer of the newly assigned Homeland Response Force Command and Control element. He held that position until 2014 when he was selected for his first Battalion Command at the 106th Regiment - Regional Training Institute,as well as the full-time Homeland Response Force program coordinator at Joint Forces Headquarters - NY.

In 2016 he was selected as Commander of the 2nd Weapons of Mass Destruction - Civil Support Team.

Sacchetti is currently attending the Naval Postgraduate School's Center for Homeland Defense and Security's Master's Degree Program and is writing his thesis on bioterrorism and biodefense. He holds both Masters and Bachelors of Science degrees in microbiology from the University of Massachusetts, Amherst.

Sacchetti resides in Nassau, NY with his 15 year old son, Adam, his fiancé, Ms. Jennifer Boucher, and her daughter, Alexus Boucher and their dog, Bella. They also enjoy spending time with Ms. Boucher's other adult children Morgan, and Noah and Morgan's son Kai.

The 2nd Weapons of Mass Destruction--Civil Support Team is based at Stratton Air National Guard Base in Scotia. The team can deploy throughout upstate New York or the northeast from that location. The 2nd CST routinely sends teams to be available during major events which could be the target of an attack like the Watkins Glen NASCAR races, the Utica Biolermaker road race, the Great NY State Fair, and the Baseball Hall of Fame induction ceremony.

The 2nd CST is one of two Civil Support Teams manned by full-time members of the New York National Guard.

The New York National Guard also maintains the 24th CST which is based at Fort Hamilton, Brooklyn and focuses on operations in the New York City metropolitan area.

There are 57 teams located across the country.