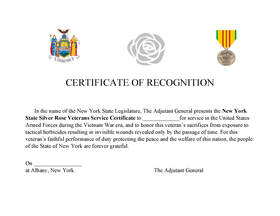 LATHAM, NY (06/23/2021) (readMedia)-- Major General Ray Shields, the Adjutant General of New York, announced today that Vietnam Era veterans who were exposed to herbicides employed during that conflict can now obtain a certificate from New York acknowledging their service and sacrifice.

The New York State Silver Rose Veterans Service Certificate recognizes New Yorkers who served in the Armed Forces and who, during their service, were exposed to the dioxin or phenoxy herbicides, more commonly known as "Agent Orange."

The Silver Rose Veterans Certificate honors the sacrifices of veterans who have suffered illness due to the effects of Agent Orange exposure.

The certificate is available to veterans who are current New York citizens or who were state citizens during the period when their exposure occurred and who are suffering from the toxic effects of these herbicides.

The designation may also be awarded posthumously on behalf of the veteran to next of kin.

The Silver Rose has been adopted by some veterans groups as the symbol for veterans dealing with the impact of herbicide exposure incurred during their service. In creating this certificate the New York State Legislature honored this selection of a symbol by veterans.

To apply for the certificate, veterans can go to the Division of Military and Naval Affairs website and go to the Community listing and then click on the New York State Silver Rose Certificate button. Or veterans can go directly to the webpage here: https://dmna.ny.gov/silverrose/

Veterans will need to provide their current address and telephone number and select the branch of service they served with during their exposure by using the application on the webpage.

Applicants must provide a DD-214 as proof of their military service and a medical document – a doctor's note will suffice-indicating they are suffering from an illness as a result of herbicide exposure during their service.

These documents can be scanned and uploaded via the web page application.

Division of Military and Naval Affairs personnel will then send the requested certificate.

Service veterans eligible for the award will have served during the Vietnam War era – 1962 to 1975 in the following areas:

• Veterans who served in a unit in or near the Korean Demilitarized Zone (DMZ) anytime between September 1, 1967 and August 31, 1971

The New York State Silver Rose Veterans' Certificate is an expression of support and appreciation from the New York State Legislature and the people of New York to veterans who have had their health adversely impacted by their exposure to herbicides as a result of honorable military service.

The awarding of the certificate does not provide the holder with any monetary benefits or disability compensation. The certificate is not recognized by the federal Veterans Administration as proof of exposure to toxic chemicals.