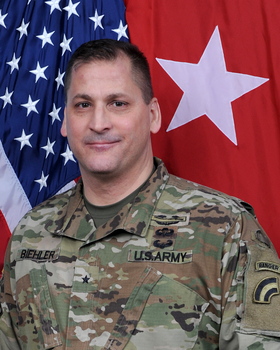 Biehler is currently one of two assistant division commanders for the 42nd Infantry Division, the New York Army National Guard's other major general officer command, based in Troy.

The division headquarters deployed to Kuwait in 2020 where it served as the headquarters for Operation Spartan Shield, the U.S. Army element in the Middle East.

Biehler is taking over for Brig. Gen. Jack James who has led the 53rd Troop Command since September 2019. James and Biehler are switching positions. James will take over as 42nd Infantry Division assistant division commander – maneuver.

The change of command ceremony will take place on October 17 at Camp Smith Training Site near Peekskill, where the 53rd Troop Command is headquartered.

"Joe Biehler is a Soldier's Soldier. He has successfully commanded at every level and is the right choice to lead the diverse units of the 53rd Troop Command as they focus on strength and Soldier readiness," Shields said.

He also deployed to Iraq in 2004 while serving as the operations officer of the 2nd Battalion, 108th Infantry and then as the battalion's commander during a 2012 deployment to Afghanistan.

Biehler has also commanded the 27th Infantry Brigade Combat Team which is headquartered in Syracuse but has elements across the state.

He has served as the assistant division commander for maneuver of the 42nd Infantry Division since 2017.

Biehler was born in Rochester, New York and graduated from McQuaid Jesuit High School in 1983.

In civilian life he works as a Finance Director for L3 Harris Technologies in Rochester.

He and his wife Sonya live in Webster.