Ribbon-cutting ceremony to be held Feb. 3 at 11 a.m. in Mund College Center 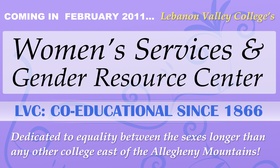 ANNVILLE, PA (01/25/2011)(readMedia)-- Lebanon Valley College is continuing its tradition of dedication to gender equality by launching a Women's Services and Gender Resource Center on campus. The center will celebrate its grand opening with a ribbon-cutting ceremony and student and faculty presentations on Thursday, Feb. 3 at 11 a.m. in Mund College Center.

The Valley has a long tradition of equity between genders. At its founding in 1866, the College was a co-educational institution-the first co-ed institution east of the Allegheny Mountains and a true rarity in the U.S. at the time.

"Since its inception, LVC has operated according to a belief in equality between men and women," said Dr. Catherine Romagnolo, assistant professor of English and member of the center's steering committee. "This center furthers the College's commitment to supporting the needs of its female population and providing gender resources for all."

The center's daily operations are run by a team of 20 volunteers overseen by the steering committee, and the doors are open Monday to Thursday from 11 a.m. to 2 p.m., Tuesday and Thursday evenings from 6–10 p.m., and Sundays from 6–9 p.m. It is housed on the main level of the Mund College Center between the dining halls.

In addition to serving as a resource center for gender equity issues, the Center will sponsor a film series designed to raise awareness of marginalization and underrepresentation of women in today's society. It also seeks to serve as a safe haven for discussions about sexual assault and abuse.

"Even though women outnumber men on college campuses, there are still many instances of marginalization and inequities," said Ricks. "We have a whole spectrum of things to talk about."