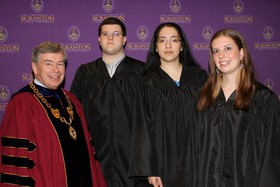 Burbella was a member of the Alpha Lambda Delta and Beta Gamma Sigma honor societies and made Dean's List every year at The University. He served as treasurer of the Ignatian Consulting Club and participated in Scranton Emerging Leaders, the Business Club and the Portfolio of Responsible Investments under Student Management.

Burbella was a member of The University's soccer team, where he made the Landmark Conference Academic Honor Roll three years. He also served on The University's Student-Athlete Advisory Committee. He was a Financial Fellowship Intern at MetLife and represented The University at the Georgetown University's McDonough-Hilltop Business Strategy Challenge.

Wilusz was a member of the Alpha Kappa Delta Honor Society. He interned with Lawrence A. Durkin, Esq.

Wilusz plans to attend law school for his Juris Doctorate.

Yeung received the Excellence in Electrical Engineering Award. He earned a bachelor of science in electrical engineering.

Yeung was the webmaster of The Institute of Electrical and Electronics Engineers.

After graduation, Yeung will be employed as a station engineer for PPL in Susquehanna.

Salmon was a member of the Nu Rho Psi, Beta Beta Beta, Phi Sigma Tau, Alpha Lambda Delta and Alpha Sigma Nu honor societies. She was also a member of the Biology Club, Biochemistry Club and Scranton Neuroscience Society and was named to "Who's Who Among Students in American Universities and Colleges." She interned during the summer at the University of Pennsylvania and New York University and completed research experiences with Hani Atamna, Ph.D., of The Commonwealth Medical College and Timothy Cannon, Ph.D., of The University of Scranton.

Salmon will enter Brown University's Neuroscience Graduate Program in the fall to work toward a Ph.D. in neuroscience.

Wong was a member of the Sigma Tau Delta, Phi Alpha Theta, Alpha Lambda Delta and Alpha Sigma Nu honor societies and was named to "Who's Who Among Students in American Universities and Colleges."

She served as a consultant for the Writing Center, chief copy editor for The Aquinas, and was involved with the Pre-Law Society, Fencing Club and Royal Historical Society.

Wong will attend the Villanova School of Law to obtain her Juris Doctorate and plans to practice law in Pennsylvania.

Digital Image: The University of Scranton recognized 65 members of the class of 2012 for academic achievement and service at its Class Night Ceremony. Standing from left are Harold W. Baillie, Ph.D., provost and vice president for academic affairs at The University of Scranton, Eric Michael Wilusz, Rose Marie Carmela Wong and Torrey Lyn Salmon. Absent from photo are Joseph Thomas Burbella and Tsung Ki Yeung.