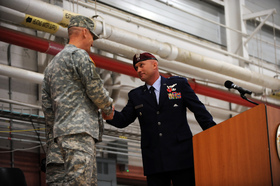 Capt. Ron Maloney, of Middle Island, recieving his Bronze Star from Major General Patrick Murphy, the Adjutant General of New York, in December 2013. Maloney will be honored by the New York Jets.

LATHAM, NY (09/18/2014)(readMedia)-- New York Air National Guard Captain Ronnie Maloney, a resident of Middle Island who received a Bronze Star for heroism in Afghanistan, will be recognized by the New York Jets during  their game against the Chicago Bears on Monday, Sept. 22 at Metlife Stadium in Rutherford, New Jersey.

Maloney received the Bronze Star for Valor, along with five other members of the 106th Rescue Wing, for their role in a Dec. 10, 2012 mission in Afghanistan in which they braved intensive enemy fire to wounded rescue American and Afghan Soldiers.

He is being recognized by the Jets as part of the team's "Salute to Those Who Serve" program.

He was recommended for the recognition by the Military Association of New York State, the professional association of the New York National Guard.