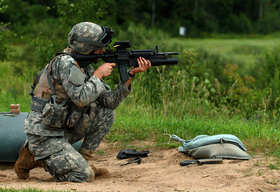 Spc. Steve Freiberger, with Co. C, 2nd Battalion, 108th Infantry Regiment, fires his M-4 carbine during qualification on a Fort Drum range July 25, 2010. The unit will deploy to Afghanistan in 2012.

The brigade is headquartered in Syracuse, N.Y. and expects to deploy more than 2,200 New York Army National Guard Soldiers as part of the brigade combat team.

The unit has been training and preparing for this mission for the past year.

The brigade is commanded by Col. Geoffrey Slack.

Units that are part of the brigade preparing for mobilization in the fall of 2011 include:

The task force will be joined by more than 750 Soldiers of the South Carolina Army National Guard's 4th Battalion, 118th Infantry, based in Union, S.C.

The 27th IBCT is scheduled to deploy to Afghanistan to perform security force assistance in early 2012. The unit will organize, train, equip and advise Afghan security forces. The brigade will assist Afghan forces in their training and develop their combat capabilities.

The unit is expected to serve on active duty for one year, serving overseas for approximately nine or ten months.