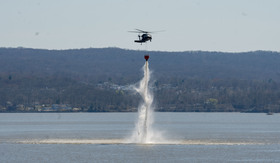 COLONIE, NY (05/05/2021) (readMedia)-- Three Army National Guard helicopters will conduct firefighting training over the Mohawk between Route 9 and I-87 on Thursday and Friday, May 6 and 7.

The aircrews will be practicing scooping up 660 gallons of water in collapsible buckets slug underneath the Black Hawk helicopters and then dumping the 2.8 tons of water onto a simulated fire.

Flying with almost three tons of water hanging beneath the helicopter is a skill which must be trained annually to maintain proficiency.

Eighteen Rangers will practice controlling a water drop from the ground, as well as helping to direct the aircrew onto a target while stationed inside the helicopter.

The goal of the inter-agency training is to ensure better cooperation during an actual fire.

The Mohawk River will serve as both the water source and the target for the two days of training.

Army National Guard helicopter crews from the New York Army National Guard's three flight facilities-located in Latham, Rochester and Ronkonkoma-practice their firefighting skills each spring to be ready to respond if the Department of Environmental Conservation requests assistance in fighting fires.

The last time New York deployed National Guard helicopters on a firefighting mission was in July 2018. Two New York Army National Guard UH-60 helicopters were called to a forest fire in Flat Rock State Forest in Altona, where the aircrews dropped 126,000 gallons of water on the 526-acre fire over three days.

Four aircrews based at the Latham flight facility will be certified in the use of the Bambi fire buckets during the two days of flight training and one day of class room training.

The UH-60M is the most recent version of the helicopter the Army has operated since 1979. The M version incorporates an all-digital display cockpit, improved rotors, and a more powerful engine.

The participation of the Connecticut Army Guard helicopter is the result of a 2019 Emergency Management Interstate Compact between New York Gov. Andrew M. Cuomo and Connecticut Gov. Edward Lamont.

The Connecticut Soldiers are part of Charlie Company of the 3rd Battalion, 142nd Aviation. The battalion is headquartered on Long Island and the battalion's Alpha Company is base at the flight facility at the Albany International Airport.

The training also allows aircrews to practice hooking up the Bambi buckets, which weigh 260 pounds empty, and ensure the electrical connections that allow the crew to drop water are working.