Staff Sgt. Stephen Mulholland will represent New York at regional competition in New Jersey on May 3 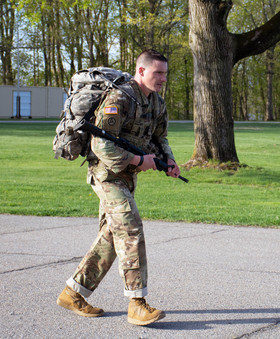 Mulholland will now represent New York against National Guard Soldiers from the six New England states and New Jersey in a similar completion conducted May 3-7 at Joint Base McGuire-Dix-Lakehurst in New Jersey.

The winner of that competition competes on a national level against National Guard Soldiers from across the country.

For the past three years New York Army National Guard Soldiers have won the northeast competition in both the junior enlisted and non-commissioned officer category.

The 33-year old Mulholland is a member of Headquarters Company of the 2nd Battalion 108th Infantry Regiment. He represented the New York National Guard's 27th Infantry Brigade Combat Team in the competition, which was held at Camp Smith Training Site in the Hudson Valley near Peekskill.

He competed against two other sergeants representing other components of the New York National Guard.

He joined the New York Army National Guard in 2010. He has previously been named Non-Commissioned Officer of the Year, and Soldier of the Month.

He previously served in Military Police units and deployed to Afghanistan in 2013-2014.

The competition tests the Soldiers physical fitness, military knowledge and skills, marksmanship, endurance, and ability to perform under pressure.

"The will get to compete as a team in New Jersey and I am confident that these fit and ready Soldiers will represent New York with excellence," he said.

In the marksmanship competition, Soldiers engaged pop-up targets with the standard issue M-4 carbine, the M-9 pistol and the M-500 military issue shotgun. They were required to engage targets while on the move and being required to conduct other tasks like dragging a simulate casualty to safety.

The competitors were tested on their ability to conduct first aid tasks, emplace an anti-personnel mine, respond to a chemical attack and disassemble and assemble two type of machineguns and navigate using map and compass.

Their marksmanship skills with the M240B machine gun were tested in a virtual engagement trainer, and the Soldiers were quizzed on military information and uniform wear by a board of senior non-commissioned officers.

The Soldiers' physical fitness was challenged by a drill known as a "Murph" in which they had to run a mile, do 100 pull-ups, 200 pushups, 300 squats and the run another mile.

"Mulholland used his experience to ease through the tough spots," Piwowarski said.

While physical endurance and fitness is necessary, "mental fortitude" is also a requirement, Mulholland added.

Soldiers don't do every one of the tasks in the competition on a regular basis, he explained. Success meant "digging deep back into your formal military training" to remember those skills, he added.