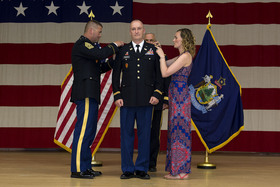 Preston is a 27 year veteran having served in both Iraq and Afghanistan in support of Operation Iraqi Freedom and Operation Enduring Freedom, respectively.

"I am really pleased to watch Dean continue to grow," said Corbett. "He has proven himself at every level. We know that he makes stuff happen, and now we have him looking at the big picture. He is working with his crew, nurturing, developing, and training them. We are really excited to see what the future holds."

Preston was commissioned in 1990 through the University of Maine Black Bear Battalion Army ROTC program. After completing Engineer Officer Basic Course, Preston was assigned as an engineer platoon leader in the 262nd Engineer Battalion (Horizontal). He went on to serve in various command and staff assignments within the 133rd Engineer Battalion.

While mobilized to Afghanistan, Preston served as the Battalion Commander leading 926 soldiers from six different companies, representing seven different states. Most recently he has served as Commander for the 52nd Troop Command.

"This is a team effort," said Preston. "First, I want to thank my family because our family gets us to where we are. I don't take this rank lightly, this is a validation for me of what I do, and how I do it. I will always keep the welfare of our soldiers, the betterment of solders in the forefront in my mind."

Preston holds holds a master's degree in Strategic Studies from Army War College and a Bachelor of Science in Civil Engineering from the University of Maine.