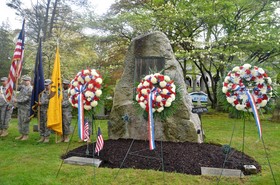 A photograph from the 2018 ceremony commemorating the New York Guard in Sleepy Hollow Cemetery.

SLEEPY HOLLOW , NY (04/27/2021) (readMedia)-- A hybrid virtual and real world ceremony at Sleepy Hollow Cemetery will honor 40 New Yorkers who died while guarding the New York City water system during World War I on Sunday, May 2.

Thirty-two of those members of the New York Guard, a state volunteer military force, died as a result of the worldwide flu pandemic that swept the world in 1918 and 1919.

Members of the public and press are invited to participate in the Zoom meeting that will be held concurrently with events in the cemetery in order to respect COVID-19 precautions.

WHAT: A memorial service to commemorate the 32 members of the New York Guard's 1st Provisional Regiment who were assigned to protect the New York water system against German sabotage and who died during the "Spanish flu" pandemic which swept the World in 1918 and 1919. Events will happen at the cemetery while remarks and music for the event will be conducted remotely and on line. The event takes place at the 1st Provisional Regiment Memorial in the cemetery. A wreath will be placed onsite, and some remarks will occur at the cemetery. Other remarks will be delivered via Zoom.

During the First World War German agents appeared to have successfully destroyed a munitions plant on Black Tom Island in Jersey City, New Jersey, prior to American entry into the war in the spring of 1917. There was concern that the New York City water system of reservoirs and aqueducts could be sabotaged as well.

New York formed the 1st Provisional Regiment to guard the aqueduct system in 1917 and 1918.

These citizen volunteers, ranging from their teens to their 60s were armed with obsolete weapons and clothed in old uniforms and paid $1.25 a day, but they did their duty, walking patrol day-after-day and night-after-night. Average strength was about 1,600 volunteers. More than 8,000 New Yorkers served in this home guard during World War I.

When the so-called "Spanish Influenza" arrived in New York in the last months of 1918, 32 New York Guard volunteers of the 1st Provisional Regiment contracted the disease and died.

To honor the New York Guard members who died on duty-32 who died from influenza and eight other members-- a bolder from Bonticon Crag in the Shawangunk Mountains, along the line of the aqueduct that the Guard members protected, was moved to Sleepy Hollow Cemetery and turned into a memorial on property dedicated by William Rockefeller.

The New York Guard of today is an all-volunteer uniformed force whose members augment and assist the New York Army National Guard in response to state emergencies.

During the pandemic New York Guard members have served alongside the New York National Guard, providing logistics and administrative support at COVID-19 testing sites, in warehouses, and at vaccination clinics.