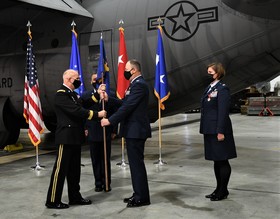 Sander had most recently served as the 109th Airlift Wing Vice Commander, the wing's second in command.

The 109th Airlift Wing flies the LC-130H "Skibird" the largest aircraft in the world with the ability to land on ice and snow. The wing supports science research in Antarctica and Greenland, as well as operations in Polar Regions.

Attendance at Sunday's change-of-command ceremony was limited due to COVID-19 restrictions. The event was recorded and posted on the wing's Facebook page.

Major General Ray Shields, the Adjutant General of New York, recognized Kilgore for her service and praised Sander as a capable leader.

His role, Shields told Sander, is to be "laser focused" on building the strength of the 109th Airlift Wing while maintaining combat readiness and being able to handle New York State missions like the COVID 19 response.

In his remarks, Sander thanked Kilgore for her three years of leadership and told those listening that he was proud to be the wing commander.

" The 109th is present and accounted for and one hundred percent ready to execute our mission no matter what obstacles stand in our way," Sander said.

Sander joined the 109th Airlift Wing in 1990 and earned his commission as a second lieutenant in April of 1991 through the Academy of Military Science at McGhee Tyson Air National Guard Base in Tennessee.

Sander has served as an aircraft commander, a flight instructor and Chief of Antarctic Operations, as well as the wing chief of plans, chief of current operations, and a flight examiner.

Sander is a command pilot who has amassed more than 4,350 flying hours.

Other roles include serving as executive officer for the Chief of Staff of the New York Air National Guard, Operations Support Flight and squadron commander, deputy maintenance group commander, the 109th Operations Group Commander, and the 109th Airlift Wing Vice Commander from 2018 to the end of 2020.

His education includes a Bachelor of Science Degree in Interdisciplinary Engineering from Clarkson University, the Air Force Squadron Officers School, the Air Command and Staff College and the Air War College.

See video of the event on the 109th Airlift Wing Facebook Page: