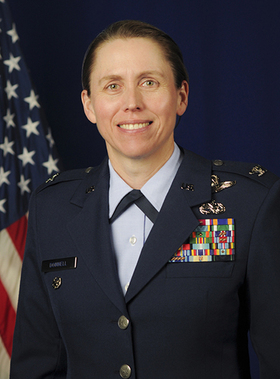 Members of the press are invited to attend the short ceremony.

WHAT: Promotion of Col. Donnell to one-star general. The ceremony will involve Donnell taking the oath of office and pinning on her new rank. Donnell will be the fourth New York Air National Guard female officer to be promoted to general officer rank.

Video and still photographs of the promotion ceremony and an opportunity to interview Brigadier General Donnell.

Members of the media must call the the Division of Military and Naval Affairs Public Affairs Office at 518-786-4581 for access to this secure military facility.

Col. Denise M. Donnell is the commander of the 105th Airlift Wing at Stewart Air National Guard Base in Newburgh, NY.

She has served as the commander of the 105th Airlift Wing, which operates the C-17 Globemaster III strategic airlifter, since 2017.

Donnell was born at Camp Pendleton, Calif., and graduated from Georgetown University in 1993 with a Bachelor of Science Degree in Foreign Service. She received her commission through Naval ROTC and served in the Navy for nine years as a naval aviator.

She joined the New York Air National Guard's 105th Airlift Wing in 2002 and qualified to fly the C-5 galaxy.

In 2005 she was selected as the commander of the 105th Aircraft Maintenance Squadron and earned her maintenance badge while continuing to fly as a C-5 aircraft commander.

In May 2010, she assumed command of the 105th Maintenance Squadron, and led the unit through a conversion from C-5 to C-17 aircraft and simultaneously qualified as a C-17 pilot.

In 2013 she was assigned to the 109th Maintenance Group at Stratton Air National Guard Base in Scotia and also qualified to fly the LC-130 "Skibird" that the wing flies in support of missions in Antarctica and the Arctic.

In 2016 she was reassigned to the 105th Airlift Wing as Wing Vice Commander.

Donnell holds a Bachelor of Science Degree from Georgetown University and is also a graduate of the Air Command and Staff College and the Air War College.

She is married to Greg Szczesny, the President of Saratoga Advisors, and a graduate of the United States Military Academy. They have two children.