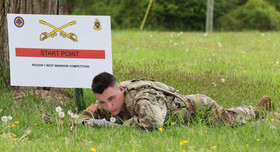 Miller, age 21, was the winner in the junior enlisted category at the Northeast region Best Warrior competition held at Joint Base McGuire-Dix-Lakehurst from May 3 to 7.

Miller, who joined the Army National Guard in 2017, serves in the Scout Platoon of the 2nd Battalion, 108th Infantry Regiment which is headquartered in Utica.

He took part in the competition alongside Staff Sgt. Stephen Mulholland, an Auburn resident who is also a member of his battalion, who was the New York Army National Guard Best Warrior winner in the non-commissioned officer category. Mulholland finished second in the regional competition in his category.

For the past three years New York Army National Guard Soldiers have won the Northeast competition in both the junior enlisted and non-commissioned officer category.

"He is a focused and professional Soldier who prepares and executes Army business with great energy," Piwowarski said.

The Best Warrior competition is an annual event in which Soldiers from across New York compete at their local units before going onto a statewide competition.

The events usually include a stress shoot, which involves engaging multiple targets with multiple weapons in a simulated tactical environment, and a physical fitness test as well as a 12-mile forced march in which Soldiers must carry a 35 pound pack and a weapon. Miller completed the march at the regional competition in two hours and fourteen minutes.

Soldiers are also judged on tasks that can range from assembling and disassembling a machine gun, emplacing a land mine, navigating at night and during the day with map and compass, to treating a simulated casualty.

Miller went directly from the competition in New Jersey to taking part in an Expert Infantry Badge test at Fort Drum, New York sponsored by the 10th Mountain Division.

He will prepare for the national competition with a program of "high-quality physical training and studying," Miller said.

A team of experienced sergeants, including Mulholland, have been helping him train for the Best Warrior competitions, Miller said, and he will continue to work with them to prepare for the Army National Guard event.

Miller said he is also hoping to get out to Arizona prior to the contest so he can get used to working out at the 7,000 feet of altitude where that contest will be held.

The winner of that competition competes against winners of the Active Army and Army Reserve contests to be the top Soldier in the entire United States Army.

Miller, a football player in high school and college, said he viewed the Best Warrior Competition as another athletic event.

"I've always been a competitor," he said. "The first time I hear about the Best Warrior I wanted to do it."

Miller is a graduate of the Army's Air Assault School and Distributed Leader Course. He has been awarded an Army Commendation Medal and Army Achievement Medal.

"I love the infantry, I do not want to do anything other than that," Miller said.

His career plan now, Miller said, is to make it past the Best Warrior Competition, and then attend as many military schools as he can to "get as much experience as I can with the Guard."

Ultimately, he would like to transfer to the active Army and become a Green Beret. That course, he said, would be the ultimate competition.: