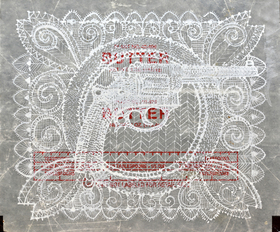 CORTLAND, NY (08/27/2015)(readMedia)-- Artist Sarah McCoubrey first noticed the discernable effects of World War I on the Belgian landscape and its people 100 years after the war took place, while she was in Brussels last fall on sabbatical leave from teaching at Syracuse University.

"The phrase 'guns or butter' runs through my head as I think about how we do not seem to learn from our mistakes - how just over 20 years after the horrors of World War I, the world was at war again, and so it continues on into the 21st century," said McCoubrey, a professor in Syracuse's School of Art.

So she used butter wrappers as well as the more conventional medium of paper for the gouache paintings that make up her upcoming "HOMEFRONT" exhibition at SUNY Cortland's Dowd Gallery.

"HOMEFRONT and Other Works by Sarah McCoubrey," a recent series of the artist's work to be shown along with a selection of her earlier drawings and mixed media pieces, will be displayed from Monday, Aug. 31, through Thursday, Oct. 15.

Located in the College's Dowd Fine Arts Center, the exhibition and related events are free and open to the public.

A faculty member at Syracuse since 1991, McCoubrey teaches drawing, color and painting. Primarily a landscape painter, McCoubrey exhibits regularly in solo and group exhibitions in nationally recognized venues. Her numerous honors and awards include a 2006 New York State Council for the Arts (NYSCA) Fellowship, a Ballinglen Foundation Residency in Ireland Fellowship in 2004, a Maryland State Arts Council Individual Artist Award in 1990, and a National Endowment for the Arts Grant Award in 1989.

Her newest body of work was influenced by both Belgium's long history in the lace industry and its centennial commemoration of Word War I.

In the "Guns or Butter" series, discarded wrappers are superimposed with lacey images of guns. "Soldier with Gas Mask I" features a soldier donning a World War I-era gas mask depicted entirely in delicate lace. In "Hooge Crater," a serene and seemingly natural pond set among trees is framed in a dainty doily. But in reality, the pond fills a void that was violently gouged into the earth by a World War I mine.

Human intervention in the natural world, which for McCoubrey is a theme of ongoing interest, is demonstrated in her previous works dating from 2012 to 2014 that are included in the exhibition.

Viewing the industrial waste beds of Syracuse's Onondaga Lake from an airplane window a few years ago, the artist was struck by the idea that the world's flora and fauna might rebel and escape the increasingly toxic earth for the sky above it, observed Fowler-Decatur.

The "Fate and Transport" series presents possible getaway contraptions constructed from materials such as hollowed-out potatoes and bits of human-made detritus. The "Escape Vehicle" series, meanwhile, captures the extraordinary flying and floating departures of the potatoes themselves.

"Though humans have often failed throughout history to prevent either the atrocities of war or trauma to the environment, McCoubrey's visually playful work quite insistently encourages us to keep trying until we get it right," Fowler-Decatur said.

Gallery hours are 10 a.m. to 4 p.m. Monday through Friday and by appointment. The Dowd Fine Arts Center is located at the corner of Graham Avenue and Prospect Terrace. The gallery is in Dowd Center, Room 106.

The exhibition is supported by the Art Exhibition Association, the Cortland College Foundation and an Auxiliary Services Corporation grant.

For more information about "HOMEFRONT," the gallery or group tours, contact Fowler-Decatur at 607-753-4216 or erika.fowler-decatur@cortland.edu.

A second image, "Soldier with Gas Mask I," from Sarah McCoubrey's "Guns or Butter" series, 2015, gouache on paper, is available on request.